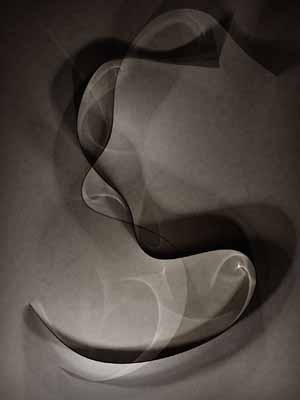 This exhibition comprises five series of photos by the German photographer Thomas Ruff (1958, Zell am Harmersbach) ranging from the start of his artistic career in the late 1970s to recent work in 2014. As one of the protagonists of the Dusseldorf School of Photography he became most widely known for his portraits, several of which are in the S.M.A.K. collection. The selection of photos being shown under the title ‘Lichten’ takes as its philosophical and scientific thread the spectrum between natural and virtual light – a fundamental shift that has taken place in the medium of photography over the last thirty years.

In addition to Ruff’s series ‘Interiors’ (1979-1983), ‘Stars’ (1989-1992) and ‘Nights’ (1992-1996), we are also showing a recent series called ‘Negatives' (2014 >). Parts of his series ‘Photograms’ (Phg., 2012 >) – a simulation of this historical genre – were created in cooperation with the Forschungszentrum Jülich in North Rhine-Westphalia. Ruff pushed the capacities of the supercomputers at this scientific research institute to the extreme, so these works might also be interpreted as indirect portraits of the machines.

In each of his series, Ruff subjects the photographic medium to systematic analysis: social, political and aesthetic aspects of image production are laid bare, and thereby the history of Modernity as it was initiated by the emergence of photography in the 19th century. As a conceptual photographer, Ruff is not so much interested in photographing reality; he focuses more on portraying the realities of photography.

The exhibition was produced with the support of the Kunststiftung NRW. After the presentation in S.M.A.K., the exhibition moves to Kunsthalle Düsseldorf.

A catalogue with contributions by Philippe Van Cauteren, Robert Fleck, Gregor Jansen, Martin Germann, and Valeria Liebermann will be published with Roma Publications.

A series of talks on light (and its disappearance) in the photography of Thomas Ruff et al.

On the occasion of the ‘Lights’ exhibition by Thomas Ruff, the S.M.A.K. and the Lieven Gevaert Research Centre for Photography are organising a series of talks by well-reputed theorists. They will discuss the principles and results of their specialised research into the image and photography, and where possible will make connections with Ruff’s oeuvre.