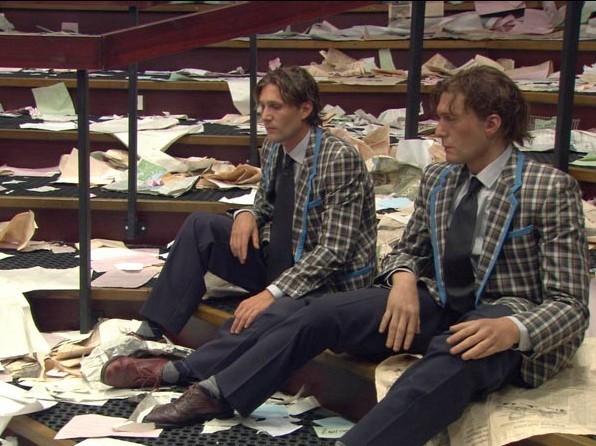 What happened to the century that trusted in the future? The exhibition presents work by artists who demonstrate the enduring power of art to play an active role in heightening political consciousness. These stark works create a space in which power and truth can be considered objectively, using art to document history, to construct a narrative and encourage serious reflection on the causes and consequences of events at the same time as narrating a deeply personal story.

The installation CAPITALISM KILLS LOVE by the French duo Claire Fontaine consists of a neon sign which occupies the whole space. The sign is written in a font called “K”, which takes its name from the Central European author Franz Kafka. It was designed as a tribute to him and to his unfinished work AMERIKA which anticipated the political frangibility of the West and of the American Dream.

The installation EAST SIDE STORY by Igor Grubić is based on the events that took place in the streets of Belgrade (2001) and Zagreb (2002) during gay pride parades, in which the demonstrators were exposed to a verbal and physical lynching at the hands of organised neo-Nazi groups, and passers-by. The work consists of a two-channel video installation: on one screen we see TV footage of alternating scenes of violence from the two cities, and on the other a re-enactment, in dance, of these events performed by a dance group from Zagreb. The dramaturgic structure of the work focuses on the media representation of real events, foregrounding distressing and frightening scenes of violence, which constitute a warning that extreme nationalism, in the absence of an immediate “threatening” ethnic Other, finds a new victim in the shape of “internal enemy”, embodied by sexual minorities in this case. The dancers on the other screen perform individually and as a group, giving their own interpretation of the events and imitating certain gestures and scenes from the TV footage; a catharsis -of sorts- for the viewer.

David Haines' allegorical musical video BIG MAC VS THE HONEY MONSTER (2010) is a disturbing and confined portrayal of a microcosm of a group of men, set in the inner sanctuary of an abattoir. The musical's text was taken directly from an article found in the British ' Daily Express' Newspaper. It stances on the already-controversial subjects of human nature and individual welfare versus the common good and resounds with implications far beyond the bounds of the abattoir, exploring problems and questions universal to the human experience.

The installation MIDDLEMEN (2001) by Aernout Mik has gained further strength and resonance in light of the financial crises of recent years. MIDDLEMEN depicts a stock market floor turned economic wasteland. A few suited men and women seem to meander about; some grimly slouched on the floor with a few scraps of paper in their hands. Made in 2001, the piece seems an eerie premonition of our current economic situation.

Exhibitions and parallel events are supported by the Mondriaan Foundation, Municipality of Amsterdam, The Netherlands Fund for Performing Arts and Amsterdam Fund for the Arts.
www.smartprojectspace.net