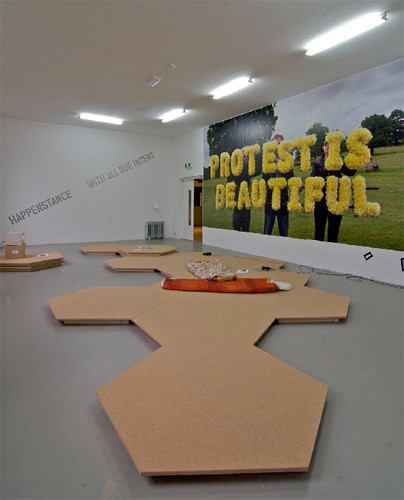 COALESCE: Making-Exhibitions with Three Principal Categories of Organisation: the Background, the Middle-ground and the Foreground

In the late 1960s, Seth Siegelaub applied the term ‘demystification’ to the changing condition of exhibition production.1 Demystification was described as ‘A process in which we attempted to understand and be conscious of our actions; to make clear what we and others were doing, so you have to deal with [curating] consciously as part of the art exhibiting process, for good or bad’.2 As a necessary tool for understanding the changes taking place in the relationship between artistic and curatorial practice, demystification was, for Siegelaub, an attempt to expose the decisions, personal choices and hidden nuances involved in the selection and organisation of art for exhibition purposes.

'Coalesce' is a result and a product of a long period of the demystification of art’s mediation processes. Whilst it denounces the position of the curator as a master planner, it is intended as a reflection upon how the re-configuration of curatorial praxis can be made apparent within the final exhibition-form. Since 2003, it has marked a shift in my own curatorial practice towards a more collective curatorial methodology, achieved by working directly with artists on every aspect of the exhibitions’ production. ‘Coalesce’ is an accumulative exhibition that gathers its form across a series of distinct exhibition-moments. There is no grand narrative, no single way of reading the exhibition as a whole work, or of clearly separating out the curatorial and artistic work therein. In each episode, artists responded to a curatorial proposition, strategy or imposed structure which result in artworks that would not have emerged without such orchestration. At the same time, each curatorial structure was responsive to each artist’s practice, which always remained the starting point for the propositions.3

‘Coalesce’ has so far been realised in four different venues, each exhibition evolving from its previous incarnation(s). To date, the project has taken the form of four distinct exhibitions at London Print Studio Gallery, UK, 2003; Galeria Palma XII, Villa Franca (Barcelona), Spain, 2004; The Model and Niland Gallery, Sligo, Ireland, 2004 and Redux, London, UK, 2005.4 ‘Coalesce: Happenstance’ at SMART Project Space, is the final instalment in an evolutionary project. Each exhibition-moment has taken the form of a mutating environment of overlapping artworks. Each new exhibition also gathers new artists and curators each time. Some invitees are called upon to activate the exhibition site by considering it as a possible pedagogical-tool within an on-going collaborative process. This also results in a staging of discursive events that respond critically to the concept, structure and form of the exhibition. For 'Coalesce: Happenstance' SMART Project Space has commissioned the final layer of the exhibition by inviting Belgian artist Richard Venlet. The multiple outcomes of ‘Coalesce’, across locations and times, form part of a continuum, with the project being considered as an unending exhibition with artists being added for each new outing. For each exhibition the artists work collectively on an installation, with their work(s) literally merging into each other, resulting in an overall group exhibition form rather than an accumulation of discernible, autonomous, individual artworks. The overall exhibition grows over time, at different speeds and with varying modes of display and foregrounds mediating strategies by emphasising exhibition design, structure and layout, all of which are intended to be as dominant as the individual works of art.

To focus on the spatial context of the exhibition-form, the gallery is a setting for the staging of spatial relations between works, and between viewers, with curating as the activity that structures such experiences for the viewer and for the work. ‘Coalesce’ provides three potential planes of interaction, with the exhibition considered to be an organised built environment which:

By applying Susan Stewart’s understanding of landscape (and the gigantic) as a ‘container’ of objects and mobile viewing subjects to our experience of the exhibition one can deduce a rejection of the notion of the autonomous objects of art as the primary medium through which the ritualised and ritualising experience of art takes place.5 This perception is then replaced by a desire for an understanding of these rituals at the level of the space of exhibition(s). For Carol Duncan, the experience of the exhibition space is organised for the viewer through the ‘arrangement of objects, its lighting and architectural details [that] provide both the stage set and the script’ for gallery visitors to perform their experience of culture in a prescribed manner, with the exhibition site operating as the framework of this experience that has been passed down over time and understood by its users as a space of performed reception.6 Such an ameliorated reception of art and objects of cultural value disguises the ideological forces behind such ‘cultural experience[s] that claims for its [exhibited] truths the status of objective knowledge.’7 ‘Coalesce’ considers in practice, how the ritual site of exhibition is structured for the viewer at each stage of the curator’s involvement in the organization of an exhibition’s contents, display and spatial arrangement.
‘Coalesce’ applies the metaphor of the exhibition as a landscape as a means of establishing a formal structuring device, responsive to three planes of interaction, available to the viewer. Structured around three spatial categories – the background, the middleground and the foreground – these terms of classification were used as three prescribed terms of reference for thinking about how exhibitions are constructed. These spatial coordinates are then utilised as organisational strategies through which the exhibition can consider the proximity of the viewer to each of the artworks as well as to the exhibition display, with respect to exhibition production as a form of co-authorship. Each artist or artwork is then selected to respond to one of the three organisational parameters.

1. The background is considered to be the architecture of the exhibition space, the primary layer of the exhibition under discussion. The white walls of each gallery are at least partly painted, covered, or pasted over and converted from a blank space into a dominant aesthetic experience.

3. The foreground represents a space of containment, in which the viewer is requested to take part in a subject-to-object relationship with those artefacts, images and works of art that could be categorised as autonomous objects for study in their own right. Such works arrive in their complete form and leave intact after the event of the exhibition. These works can not be adapted or changed by curatorial intervention, each of which require certain inherent conditions of display.

These three organisational categories are not only employed to facilitate the selection of works for each exhibition but also intermingle into the final exhibition form. The intention of ‘Coalesce’ is to accommodate a cross-fertilisation of different artistic and curatorial positions within a single unifying curatorial project over an extended period.

As important as it is to maintain a consistent curatorial methodology across a series of exhibition platforms, it is also crucial to extend the potentiality of this vocabulary while testing its limitations. Each exhibition attempts something unique, while adhering to an overarching curatorial framework set out beforehand. Each exhibition-version of ‘Coalesce’ can be read as separate and discrete outcomes, or parts of a more cohesive investigation into the group exhibition as a space of experimentation. They are each particular responses to the question of what mode(s) of authorship is/are being represented through the production of the group exhibition.

Setting out to identify the foreground, middle-ground, and background material for each exhibition demonstrates how the production of an exhibition can be structured around three separate, but interdependent, stages in which the group exhibition as a medium could be divided into three categories of organisation regardless of what was contained therein. The intention is to define a curatorial strategy from the outset as a means of demonstrating how such a methodology could be usefully applied to the production of group exhibitions. This strategy demonstrates how curating can bring about a certain order to the exhibition material through the configuration of the architectural setting, the exhibition design, form, style and artistic content. By focusing on an overarching organisational structure it is my intention to show how each individual curatorial statement, made manifest in these exhibitions, is the result of divergent, complex, and dialectical relations between the curator and the artist as co-producers. By making these interrelations apparent from the outset, ‘the difference between collaborative and authorial structures’ converge during a process of co-production, leading to the construction of co-operative and co-authored group exhibition-formations.8

1 Much of the discussion around Siegelaub’s curatorial projects benefits from considerable hindsight for, even during the 1960s, the term ‘curator’ was never used by Siegelaub in relation to what he was doing at the time. It is only in the context of other people’s subsequent texts about his practice of the 1960s and as part of curatorial debates in the 1980s and 1990s, that Siegelaub has been called a curator.

4 Documentation from all four manifestations to date are viewable on the website www.coalescent.org.uk which shows documentation of each exhibition and represents the development of the project since 2003.

5 Stewart, Susan. ‘The Gigantic.’ On Longing: Narratives of the Miniature, the Gigantic, the Souvenir, the Collection, (Durham and London, Duke University Press, 1993), p. 71.

8 In his keynote address for the Banff 2000 International Curatorial Summit at the Banff Centre, 24 August, 2000, Bruce Ferguson highlighted three recurring issues in contemporary curating, the third of which was ‘the difference between collaborative and authorial structures.’ See Townsend, Melanie. ‘The Troubles With Curating’, Beyond the Box: Diverging Curatorial Practices, Ed. Melanie Townsend (Banff, Canada, Banff Centre Press, 2003), p. xv.
www.smartprojectspace.net