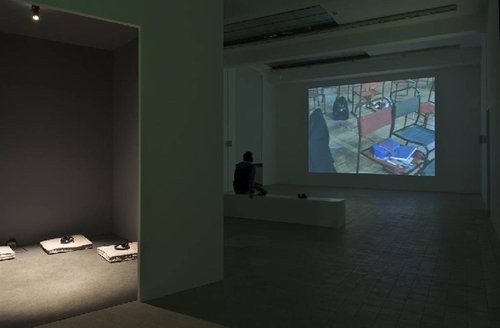 Musical sounds and patterns mediate between people’s awareness of the world around them and their social relationships. Some scholars argue that music is fundamental to our social life and central to the very formation and reproduction of human societies. ‘For the Birds’ looks at songs and music as a social phenomenon – particularly in relation to its manipulative, participatory, and activating qualities in the public realm. The title playfully references the fact that music is a political tool, taken from John Cage’s publication For the Birds: John Cage in Conversation with Daniel Charles. 1)
The participating artists deal with the ‘sociality’ of music, the processes at work in the production and consumption of music within particular social and historical circumstances. Their works reflect upon various types of sound, song and music, varying from background music, national anthem, choir music, and the Islamic call for prayer. Arrangements and processes implicit in the production, reception or consumption of these are being examined through various artistic strategies. Inextricably linked to this are implications for the highly debated issue of cultural and social identity. This is not to say that music merely reflects or expresses existing social and cultural differences; issues of region, race, age, gender, language, or class are very significant to our understanding of music.
Johann Haslauer stated that “Sounds and music have always been a means of self-perception in a community. Music and sound in the public sphere produces resonance in the common being, a kind of material equivalence of ‘Mit-Sein’ (Heidegger). Public space is the local spatial layout for the common being, providing room for representations of its “inside”.” 2) By including Luke Fowler’s experimental documentary on the composer Cornelius Cardew (1936-81) and Justin Bennett’s newly commissioned work about the disrupted performance of a musical piece by Karlheinz Stockhausen in 1969, ‘For the Birds’ directly refers to a period in time when issues about inclusion, exclusion and participation caused heated debates in the Western music world. This notion of participation, hierarchy and manipulation evokes the issue of songs and music in the (semi-)public sphere, as an activating, manipulative or social binding tool, a notion very much present in the other works in this exhibition.

1) Cage, John. For the Birds: John Cage in Conversation with Daniel Charles, New York: Marion Boyars, 1981, p. 11: " ... he asked me ... whether my title was merely a joke. I said: No. I am for the birds, not for the cages in which people sometimes place them."
2) Haslauer, Johann; statement in a conference paper for Music and Sound in Public Space, SDU
Esbjerg, Denmark, November 16-17, 2007
www.smartprojectspace.net