I’m Losing More than I’ll Ever Have 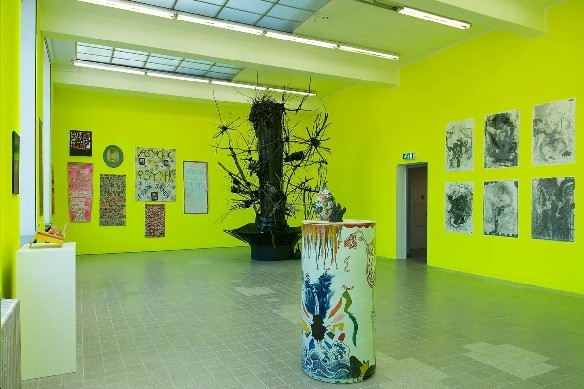 The exhibition I’m Losing More than I’ll Ever Have (The Practice of Everyday Life) aims to engage as wide an audience as possible in a dialogue around the paradoxical gaps between life as it is lived by a society of individuals, and the aspirations afforded by spectacular life as we absorb it through mediated images of ourselves and everything around us. Borrowing its title from the 1987 Primal Scream song of the same name, which captivated the mood of Britain’s bleak Thatcher years, and informed a youth so redundant of hope they could only live in the now, when everything mattered right then. Now that the end of Capitalist growth is in sight, the lines of flight are productive when they attempt to challenge the existing order and traverse the odyssey of spirit through history and culture. By organizing the Institutional space differently, the exhibition demonstrates an artistic strategy of actualizing the possible ways in which art can be developed today and still fulfill its historical mission while testing Alain Badiou’s 'existence of the communist hypothesis, in our consciousness and on the ground'.

The desire to change the world has often led artists to align themselves with wider social movements and to break with established institutions of art. This exhibition gathers together a selection of artists' whose different critical and artistic reference points refuse to participate in the tired prescriptions of marketplace and authority and instead create new methods of engagement that transcends the outmoded formulations of insurrection and resistance.

Using painting, sculpture, and installations, Georgian artist Lado Darakhvelidze traces power relations rooted in different hierarchical structures, such as within media, political or economic systems. A key idea in the work of Darakhvelidze is the notion of the Citizen-Journalist, who represents the views of the wider public. It can be seen as a reinstatement of citizenship and a form of direct democracy, serving as a barometer about social and political interests, tendencies, and prejudices. His on-going project Museum TV Station (MTVS) refers to activities in which the artwork or curatorial event evoke actual and engaged political positions, transforming the museum, gallery, or venue into what Darakhvelidze would call an (Open-Source) Information Station. Darakhvelidze’s work has been shown on an international level, receiving considerable acclaim for his installation Ideal Media, which appeared at the Feriköy Greek School as part of the 11th Istanbul Biennial. Participants include Alexander Delphinov, Charlie Fox, Damon Taylor, Evelyn Austin, Irakli Kakabadze, Jimini Hignett, Kung Fu Junkie, Mr Solo, Mark McGowan, Nadia Tsulukidze, Outsider, Pamela Renner, Roel Griffioen.

The Eddie the Eagle Museum is a subversive museum founded by an independently working artist collective in Amsterdam continuously sparring with different artists and organisations in various disciplines. Unrestricted by the art market or gallery system, their focus is on talent regardless of age, medium or reputation, which covers a broad spectrum: from old talents to plant-artists, weird cooks to street musicians, master forgers, mathematic wizard artists, home-made science photographers. The collective encourage and present all that is zealous and fearless. By placing content in different contexts they build bridges between various cultural and social groups.

Cave of Forgotten Dreams is the result of Werner Herzog's exclusive expedition into the nearly inaccessible Chauvet Cave in France, home to the most ancient visual art known to have been created by man. It's an unforgettable cinematic experience that provides a unique glimpse of the pristine artwork dating back to human hands over 30,000 years ago - almost twice as old as any previous discovery. It represents, as Herzog puts it in his unmistakable voice, "the beginnings of the modern human soul" and playfully remarks that the superimposed drawings of animals' legs in different positions create the sense of movement and the cave drawings are "proto-cinema".

Christian Marclay is a Swiss-American artist and composer, whose fascination with pop culture has led to the creation of collage works and art objects, as well as his video and sound pieces. His first recorded “release,” produced and distributed by Marclay himself was Record without a Cover (1985), which collapsed the boundaries between sound and art. This piece was a regular vinyl LP distributed without a cover so that it would remain vulnerable to all surfaces and people it came into contact with. One side contained an etching, while the recording on the 2nd side of the album was a collection of samples and selected works by Marclay. Collectors of the LP were instructed not to store the album in any protective sleeve so that each object would remain individual, marked by their own “historical trajectory.”