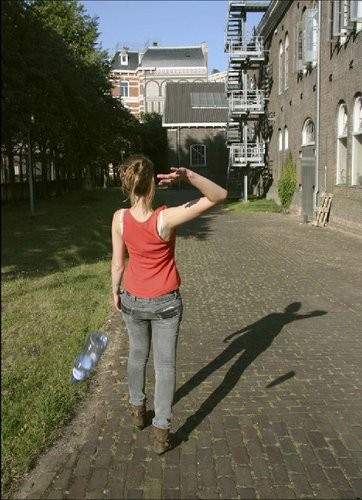 After being professionally trained as an architect at the Technical University in Delft, Van Sonsbeeck (1976) realized she was more interested in an exploration of architectural narratives than in the construction of new buildings. She gained an interest in observing the manner in which buildings mirror mental spaces and the impact physical spaces have on human interaction which was expressed in her graduation project Mental Space - How my neighbours became buildings in 2006 at the Gerrit Rietveld Academy. The project consisted of a publication and a sound piece, representing Van Sonsbeeck’s various undertakings that measured the amount of space her neighbours encroached upon in her apartment due to their noise and gazing. Inspired by the Fake Estates of the legendary New York artist Gordon Matta-Clark, who purchased useless public spaces and by Bruce Nauman videos regarding artist' behaviour, she eventually recuperated the privacy of her living space.

Thereafter Van Sonsbeeck experimented with sound, video, made objects and installations that recreated interior parts, in which text was a critical element. Recently she has developed a series of performative works, such as Guided Tours through the silence - tours through the stillness of Amsterdam’s new housing area IJburg, as part of Jeanne van Heeswijk’s project Het Blauwe Huis.

The exhibition Getting closer to Pauli is derived from a quote she discovered by Nobel Prize winning physicist, Wolfgang Pauli (1900-1958, Zürich), which he wrote in a letter to a colleague concerning the then recent electron discovery and his tribulations over its unraveling. Pauli writes: 'If I put a hand over my left eye, I see a particle. If I put a hand over my right one, I see a wave. If I open both eyes, I go mad'. Van Sonsbeeck proffers the sentence as an intriguing metaphor for life and art, for the things that cannot be described in one single image, and the impossibility of describing the multiple images that are seen all at once.

She decided to ‘get closer’ to Pauli by sourcing the quote. While researching she came across the so-called ‘Pauli effect’, named after Pauli’s bizarre ability to break experimental equipment simply by being in its vicinity. Van Sonsbeeck presents a series of photographs and texts representing her attempts to re-create several events, or ‘accidents’ that happened to either Pauli or herself. A three-dimensional set-up refers to a related anecdote from Pauli’s life, whereby his friends played a joke on him by placing a bucket full of water on top of a door. When he entered, the Pauli effect immediately reversed. The bucket never fell.

The principle of doubling up and re-creating a reflection is significant in the photograph Private Universe – the Universe of A. and in the sculptural work The light under my chair. Private Universe – the Universe of A. documents a spontaneous and highly temporary constellation of everyday life elements resembling the image of a night sky. The light under my chair consists of a series of molded objects that have been cast from the artist’s personal space; the space under the chair she uses daily in her studio - that carries her and is just centimeters from her body. Van Sonsbeeck makes direct reference to the works of British artist Rachel Whiteread Untitled (One Hundred Spaces), a series of plaster casts from 1995 that followed the precedent of Bruce Nauman’s A Cast of the Space Under My Chair dating from 1965-68 (in concrete). Van Sonsbeeck’s six casts are made from subtly varying mixtures of polyester and day-glo pigment, the pigment being ‘charged’ every 5 minutes. For Van Sonsbeeck these 'positive light sculptures' present the negative of her personal space; an interior of her personal (inverted) space arises that is a figurative representation of "the space in her head".

Sarah van Sonsbeeck studied at the Technical University in Delft. She graduated from the Gerrit Rietveld Academy in 2006 and is currently resident at the Rijksakademie van Beeldende Kunsten, Amsterdam.
www.smartprojectspace.net