The Real The Story The Storyteller 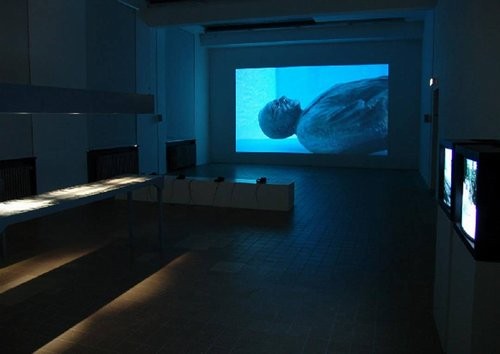 THE REAL THE STORY THE STORYTELLER

The Real The Story The Storyteller is the first solo exhibition by the Greek artist Stefanos Tsivopoulos (1973) in The Netherlands. Tsivopoulos articulates the role of collective memory and the subjective interpretation of history. Research into mass media, archival images and found footage often form the basis for films with poetic and allegoric undertones. Concurrent with the artist’s continued investigation into how collective memory is shaped by mediated reality, runs a fascination with the fine line betweenreality and its fictional reconstruction, as well as with the boundaries between the authentic and the scripted, the staged and the improvised.The Interview and Reverse both focuses on the construction of subjectivity and of the Self. The Interview consists of a journalistic interview with a Serb veteran and a docufiction, which is based on the original interview and is played out by actors. Tsivopoulos took on the role of creative producer, commissioning these two distinct visual products from opposing ‘visual industries’, blurring the borders between fiction and reality by questioning the importance of the ‘true story’. Reverse on the other hand, is an improvised monologue by a Turkish-German actor based on personal memories and that he has played out in the past. In both works however, as Marco Scotini phrases it, the subjects are “an ‘effect’ produced by means of and within the image, inside particular textual formations. In the case of The Interview, we see another transition: from the construction of subjectivity to that of history.”1)
In Untitled (Remake) the use of archival footage, and the reconstruction of an original television studio from the time of the Greek dictatorship are important elements in the work. Untitled (Plato’s Cave) again centres on the reconstructing of a war reporter’s studio. Tsivopoulos focuses on the meaning of image production and its contribution on the manufacturing of history. In these works Tsivopoulos “questions the document as an objective trace left by events, as material evidence, or as the certification of reality. In this sense, he brings into question the authenticity of the document, and thus also its authoritativeness in providing evidence for the construction of history.”2)
The multifaceted installation Lost Monument is an allegory and a metaphor for a particular moment in Greece’s recent political history: the introduction of the 1947 Truman Doctrine. Television news-clips, an archive film as well as archival photographs of the statue of the U.S. president Harry S. Truman, form a series of documents presented alongside a short film. The fact that the archives are not an integral part of the film but are presented separately is a major divergence from the two Untitled works.
1) Marco Scotini elaborates on these aspects in Tsivopoulos, Stefanos, and Nikitovic, Ana. ‘The Politics ofIdentification – Stefanos Tsivopoulos and the mechanisms of representation’, The Real The Story The Storyteller,(Belgrade: Publikum, 2009), p. 119-124.
2) Ibid. p. 3
www.smartprojectspace.net