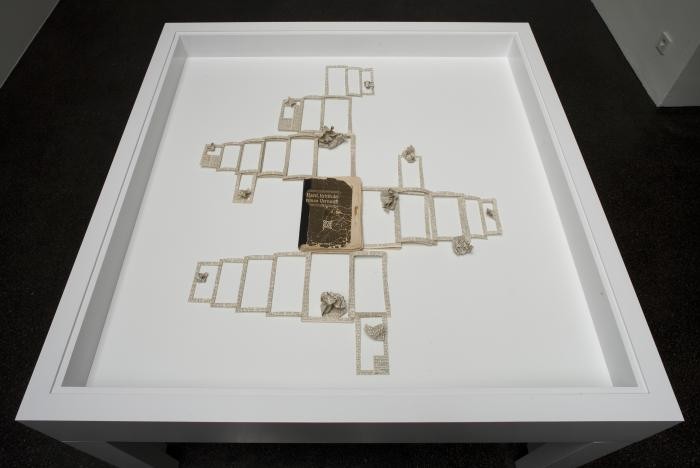 The exhibition ‘See Reason’ is the first tentative step of Stedelijk Museum Bureau Amsterdam in a long-term trajectory that will define our programming for the coming period. With ‘Project 1975’ (which derives its name from the year in which the Netherlands largely became a postcolonial nation), the programme essentially reconsiders contemporary art in view of postcolonialism. ‘Project 1975’ raises questions such as: what are the criteria for art in today’s new, geopolitical context? Is such a question even relevant in the postcolonial era? Alternatively, should we speak of a transnational era? Is it even possible to formulate new paradigms, new terminologies for art?

‘See Reason’ is named after an artwork in the exhibition, La Razón (Reason, 2010), by Cuban artist Carlos Garaicoa. The artwork is literally made out of an antiquarian copy of the book Kritik der reinen Vernunft by Immanuel Kant. The book’s pages have been folded out in an apparently structural yet entirely idiosyncratic fashion, incised with great precision, then folded out again to produce a series of ever-smaller, delicately cut-out pages. An architectural logic appears to inspire the process, although its intention seems solely to render the book unreadable, elevated to the status of laboriously handcrafted object with tactile appeal.

The concept of rationalism has a specific connotation in Cuba. It first emerged with the exploitation of slaves in the rationalised production methods in use on plantations, going on to become a vehicle for the strategic interests of the United States and, finally, an element in the ideology of the communist government. All of these forms were manifest in the oppression of Cuba’s people, and in censorship. The bankruptcy of the communist regime played out during the one-time, mass wave of emigration from Cuba in 1980, when 125,000 Cubans fled for the shores of the US by boat and, most conspicuously, during the collapse of the Soviet Union which culminated in wholesale poverty. In Havana, with its crumbling buildings like tainted shop fronts, the traces of this are writ large. The aging neon signage atop these buildings inspired Garaicoa to undertake textual interventions commenting on the situation in Cuba; these are also included in the exhibition, in his portfolio Frases.

The work of Patrizio Di Massimo refers to the postcolonial scenario specific to Italy, his homeland, in such works as The Negus said: give me the lion keep the stele! (2010), a wall-based textual work. The lion of Judah and the Obelisk of Axum, both monuments from Abyssinia (now Ethiopia) were confiscated during the Italian occupation in 1937 and taken to Rome. It was the Negus (emperor) Hailè Selassiè of Ethiopia in the 1960s, who called for the return of the artefacts during the Duke of Aosta’s visit to his country. On receiving an unsatisfactory answer from the Duke, that the lion could be returned – and promptly – but that the stele was too large and hence too expensive to be transported, Selassiè retorted with “give me the lion and keep the stele!” In the end, the stele was returned to Ethiopia, but not until 2005. Di Massimo expanded the conversation between Selassiè and the Italian Duke with other, fictional, conversations in a similarly abrasive vein, and the underlying consequences for and implications of the restitution of the two monuments. The short video Duet for Cannibals (2009) also deals with such psychological power relations. The work emerged from a commission, awarded to a number of artists, to create a portrait of a musician from Burkina Faso, resident in Milan for the last seven years. Rather than coming up with an exoticising portrait, Di Massimo staged a dialogue with his subject. In the video, the artist asks the musician if he is interested in acting in a film that explores a particular sexual act. As such, the work is not a portrait of Traore, but more a grotesque portrayal of the postcolonial situation in Italy and that country’s perception of immigrants.

The positions of Garaicoa and Di Massimo are only two in a far more wide-ranging field of contemporary art that deals with a postcolonial dynamic. ‘See Reason’ marks the beginning of Stedelijk Museum Bureau Amsterdam’s engagement with this dynamic. Exhibitions are only part of the ‘Project 1975’ trajectory. The project also takes other forms, such as the essay contribution by Lucrezia Cippitelli in the SMBA Newsletter, which, among other things, discusses the exceptional position occupied by the Havana Biennale in postcolonialism-orientated contemporary art. The lecture by Tate curator Paul Goodwin, scheduled for 23 January, is another aspect of the project. The extent to which ‘Project 1975’ has taken over SMBA’s programming is also evident from the interventional graphic identity that has been developed especially for the project by Nina Støttrup Larsen of graphic design company Mevis en Van Deursen.

Patrizio Di Massimo (1983, Jesi, Italy) is resident at De Ateliers in Amsterdam and has exhibited at spaces including the Kadist Art Foundation in Paris (2009), Witte de With in Rotterdam (2009) and Art Basel Statements (2010).

The work of Carlos Garaicoa (1967, Havana, Cuba) has been presented at the Biennale of São Paulo, 2010; the Venice biennales of 2005 and 2009 and at Documenta XI in Kassel, 2002, among others. The Museum of Modern Art Ireland in Dublin hosted a major retrospective of his work this year. Garaicoa is also affiliated as advisor to the Rijksakademie van Beeldende Kunsten in Amsterdam. He lives and works in Madrid and Havana.
www.smba.nl