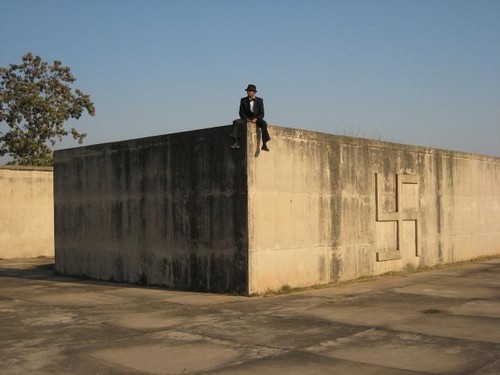 SMBA kicks off the new year with an exhibition of new work by Susanne Kriemann and Vincent Meessen. In their recent work both artists refer to specific, historic subjects, in Sweden and India, respectively, that were paragons of the modernist theory of progress and the idea of the malleability of society.
The exhibition comprises Susanne Kriemann's photo installation One Time One Million and Vincent Meessen's short video film Dear Adviser. These works were created independently of one another, but by inviting the two artists for one exhibition, both the significant differences between them and their sometimes strong correspondences are emphasised.
Modernist thought, in which technological progress (as embodied by the Hasselblad camera, the apparatus that recorded the first man on the moon) is intertwined with the idea of the malleable society, is central to One Time One Million. The work was realized during Kriemann's residence in Stockholm, where she conceived of the vast new 1970s urban extensions as an examplum of modernist principles. Kriemann takes the viewer on a sort of roller coaster ride through the 20th century. The viewer passes from perfectionist images of birds in flight and aerial photographs of rationally planned new urban neighbourhoods to images of dead birds in the storage rooms of a museum of natural history and residents of the concrete city enveloped in burkas.
In Vincent Meessen's Dear Adviser a rather different modernist icon is taken as the point of departure: the city of Chandigarh, which was designed by the Western architect Le Corbusier over a period of years and destined to become the new capital of the Indian state of Punjab. Unlike what books on the history of architecture would occasionally have us believe, Chandigarh was never an unambiguous project. The sometimes extensive empty spaces in this concrete city, catapulted into no-man's-land after 1947, as well as the at times strange signs and symbols revealed by its architecture, betray the hands of different architects and an eventful local political context full of ethnic and religious conflicts. Its supposed unequivocalness is deconstructed in an almost semantic manner in Meessen's film, which is 'dedicated' to Le Corbusier, an architect who preferred the description of 'adviser' for his work in Chandigarh.
These works by Kriemann and Meessen are outstanding examples of a present tendency in which artists are starting to look at modernism as an explicit historical entity. Particularly in urban planning and architecture (however aesthetic that can be at times) they register the profound ways in which ideology, dreams and reality have come to collide with each other. By means of their work they recapitulate this history, not merely to make it visible again, but to supply different perspectives without the strong emphasis on the ideological framework and political motives.
In that respect, this exhibition fits into a series of shows in SMBA over the past few years, among them the shows by Lonnie van Brummelen ('Frontyards and Backyards'), Hala Elkoussy ('Peripheral'), Fischer/El Sani ('The Rise'), Rosa Barba ('They Shine') and Lucas Lenglet ('A Canary in a Coalmine'). It is a series which by no means has come to an end with this exhibition.

Susanne Kriemann (b. Germany, 1972; lives and works in Rotterdam and Berlin) studied at art academies in Stuttgart and Paris and was a resident at the Rijksakademie in Amsterdam in 2004/2005. Among the venues where her work has been seen are the Kunsthalle Winterthur, Kunstverein Düsseldorf, Tent. (Rotterdam), the 2008 Berlin Biënnale and, presently, in the exhibition 'Questioning History' in the Nederlands Fotomuseum in Rotterdam. Website Susanne Kriemann

Vincent Meessen (b USA, 1971; lives and works in Brussels) studied journalism and cultural policy and completed the second phase art programme at the Hoger Instituut voor Schone Kunsten (HISK) in Ghent in 2005. He has recently had solo exhibitions in Argos (Brussels) and STUK (Leuven). He took part in the Brussels Biënnale in 2008 with the collaborative project 'Potential Estate' (since 2006, see potentialestate.org/">Potential Estate). In addition, he is a freelance curator.

Book launch of 'One Time One Million'

The opening of the exhibition 'Susanne Kriemann / Vincent Meessen' in Stedelijk Museum Bureau Amsterdam will also be the launch of Susanne Kriemann's book One Time One Million. It is the publication that accompanies the work of the same title being shown in SMBA. In addition to prints of the photographs presented in the installation, the book includes text contributions by Cecilia Widenheim and Dieter Roelstraete, among others, and from several persons involved in the realisation of the work. The design is by NODE, Berlin.
The publication was realised in cooperation with ROMA Publications, and is number 123 in the Roma series. www.romapublications.org
One Time One Million was made possible in part thanks to the European Cultural Foundation ; the Fonds voor Beeldende Kunsten ,Vormgeving en Bouwkunst and The Hasselblad Foundation, Göteborg.
www.smba.nl