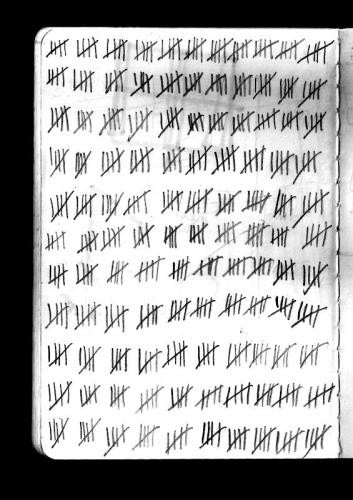 This is the Time. This is the Record of the Time takes its cue from Laurie Anderson’s ominous 1982 song From the Air. Anderson’s song depicts a feeling of imminent disaster, characterized by a loss of control over our agency and positioning in the world. We seem to live in an era of acceleration, ever-expanding and dominating technology, and ongoing crises that are more than ever before experienced on a global scale. While we can share our daily events to a degree that was not possible before, we seem to have less power over the course that the world is taking. Although we are constantly exposed to the various histories in the making, because of the incessant news feeds, social media and other recording devices we might understand less of our current times as we become overloaded with information. Events play out in real-time, we have them at our fingertips, but does that really help shed light on our current condition? Angela Harutyunyan and Nat Muller suggest that we are in dire need of reconsidering how we experience and record our times.

This is the Time. This is the Record of the Time activates different temporalities and calls on us to pause and reflect, even if only for a moment. The artists investigate to what extent the recording mechanisms and material recordings of our lived times represent and influence our perception of temporality. The works engage with history, politics, form, social and individual narrative and lived experience from a contemporary angle that looks into the past and at the present moment, and glances into the future. Rather than making sweeping generalisations or seeking truths, many works in the exhibition are personal and open-ended, hinting at the suggestion that “records of the time” are always partial, incomplete and subjective. Take for example Rayyane Tabet’s site-specific durational intervention – for a week – where he covers the exhibition space in pencil tally marks. Or Kristina Benjocki’s reinterpretation and rematerialization of Yugoslav history, by transforming excerpts of history books into woven carpets.

This is the Time. This is the Record of the Time will be accompanied by an SMBA Newsletter with an introduction by Angela Harutyunyan and Nat Muller. This newsletter is bilingual (Dutch/English) and available for free at the exhibition, and as a PDF on the SMBA website. An interview with the curators Angela Harutyunyan and Nat Muller by Vincent van Velzen is published on the blog of Global Collaborations, global.stedelijk.nl. A comprehensive publication will be issued in 2015.

Dr. Angela Harutyunyan is Assistant Professor of Art History at the American University of Beirut. She is Associate Editor of ArtMargins, a new peer-reviewed journal on art practice and art historiography published my MIT Press. Her research interests include methods of (art) historiography, art and autonomy, post-Socialist art of Eastern Europe and the former Soviet Union, contemporary art in the Middle East, methods and theories of exhibitions.

Nat Muller is an independent curator and critic based in Rotterdam. Her main interests include: the intersections of aesthetics, media and politics; media art and contemporary art in and from the Middle East. She has held staff positions at V2_Institute for Unstable Media in Rotterdam and De Balie, Center for Culture and Politics, Amsterdam. She is a regular contributor to Springerin and MetropolisM. Her writing has been published amongst others in Bidoun, ArtAsiaPacific, Art Papers, Canvas, X-tra, The Majalla, the MIT journal Art Margins and Harper’s Bazaar Art Arabia. She has also written numerous book chapters, catalogue and monographic essays.

Global Collaborations is a three-year project that aims to generate an informed and well-balanced overview of developments in contemporary art from a global perspective. It is based on collaborative partnerships with experimental and multifaceted art institutions throughout the world and encompasses exhibitions, publications, events, and an online platform. The program takes place at the Stedelijk Museum and at Stedelijk Museum Bureau Amsterdam (SMBA), the project space of the Stedelijk. Global Collaborations continues until the end of 2015 and was initiated by Jelle Bouwhuis, head of SMBA, and project curator Kerstin Winking.

Global Collaborations / This is the Time. This is the Record of the Time is generously supported by principal benefactors Stichting Ammodo and Mondriaan Fund and made possible with additional support from The Arab Fund For Arts and Culture, Amsterdam Fonds voor de Kunst, CBK Rotterdam, STEIM, and Stichting Stokroos.
www.smba.nl