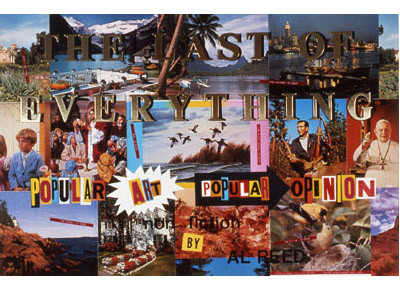 © Allen Ruppersberg
Cover Art (The Last of Everything), 1985
mixed media collage
39.5 x 59.5 x 1.5
Courtesy the Spence Collection
ALLEN RUPPERSBERG
"You and Me and the Art of Give and Take"

This exhibition marks the first major presentation of this seminal artist’s work in the United States since the 1985 Los Angeles County Museum of Art survey, The Secret of Life and Death. Among the first generation of American conceptual artists whose work changed the way art was thought about and made, Ruppersberg’s work includes paintings, prints, photographs, sculptures, installations and books that explore the intersection of art, literature, and life. This exhibition features two new large-scale works that examine the role of the viewer as an active participant in the completion of a work of art, a critical interest of the artist throughout his career. The new works also continue and expand the artist’s use of imagery from his vast archive of twentieth-century ephemera. Curator of the exhibition is Elsa Longhauser, SMMoA Executive Director, who will be joined by guest curator Constance Lewallen, Adjunct Curator at the Berkeley Art Museum and Pacific Film Archive.
Ruppersberg is among the group of conceptual artists­––John Baldessari, Douglas Huebler, Bruce Nauman, and others­––who redefined artistic practice during the 1970s.
The first of Ruppersberg’s new large-scale installations is The Never-Ending Book Part 2/Art and Therefore Ourselves a collection of more than 15,000 pages of Xeroxed images from the artist’s book collection. In a stage-like environment made of theatrical props and early twentieth-century mural-sized vintage posters, the pages are stacked in approximately fifty small cardboard boxes designed by the artist. These duplicated pages are free for the taking. In this way, Ruppersberg makes his library available and each audience member can create his or her own unique “book.”
For the second new large-scale installation, The Sound and the Story/The Hugo Ball Award for 20th Century Graphics, the artist has made two-sided laminated sheets of period postcards and games from his collection. Viewers are invited to arrange the sheets on panels that are silk-screened with images of private libraries; in this way creating their “own” story or library. Periodically, Ruppersberg will “respond” to these viewer arrangements by reorganizing laminated sheets on an upper portion of the panels.
The exhibition will also include a selection of works from two important series, The Gift and The Inheritance (1991), and Cover Art (for a Fictional Book) (mid-1980s); and a screening of educational films from the 1930s to the 1960s from Ruppersberg’s personal archive.
The publication that accompanies the exhibition will be a cross between a traditional catalog and an artist book. Based on a 1950s copy of the then-ubiquitous travel guide Guest Informant, the catalog will be co published by SMMoA and JRP Ringier, Switzerland. It will feature essays by renowned author/cultural critic Greil Marcus, Connie Lewallen, and an archive of past writings on Ruppersberg including texts by Tim Griffen, John Slyce, Margaret Sundell, and an interview with Frédéric Paul.
Ruppersberg’s work is in numerous private collections and major museums, including the Museum of Modern Art, New York, the Los Angeles County Museum of Art, the Art Institute of Chicago, and the Whitney Museum of American Art, New York. He was born in Cleveland, Ohio, and lives and works in Los Angeles and New York.

This exhibition has been supported in part by the Andy Warhol Foundation for the Visual Arts, Inc., Pasadena Art Alliance, and LLWW Foundation.
www.smmoa.org