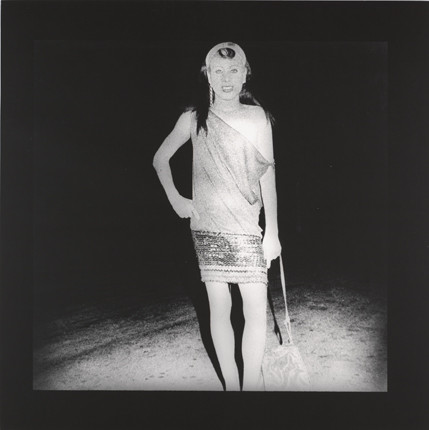 Brian Weil, 1979-95: Being in the World is the first career retrospective for an exceptional photographer whose life’s work shed light on insular and otherwise invisible communities during the 1980s and 1990s. The exhibition features sixty photographs, prints, and videos, and was curated by Stamatina Gregory for the Institute of Contemporary Art at the University of Pennsylvania. Brian Weil, 1979-95 features five distinct bodies of work: Sex (1979-1981), Miami Crime (1982-1984), Hasidim (1985-1987), AIDS (1985-1991), and Transgender (1992-1995). SMMoA is the only west coast venue for this exhibition, on view from January 17 to April 18 in the Museum’s Main Gallery.

Brian Weil conceived of photography as an excuse to become deeply involved in the lives of others. “Often I use the excuse,” he said in a 1991 interview, “and forget to make the pictures.” This oft-stated justification explains his unparalleled access to subcultures and marginalized communities, along with his production of a relatively small body of work for projects that spanned months and years at a time. Photographs, for Weil, were secondary but essential to his interest and immersion in the worlds of his subjects.

For Sex, one of the earliest New York-based series, Weil found subjects by placing classified ads in The Village Voice and various fetish and underground magazines. The resulting images capture moments of sexual exchange, bondage, and bestiality. A single self-portrait is included in the series, along with prints made of letters from prospective participants. To shoot Miami Crime, the artist trailed Miami Police Department detectives on homicide investigations, photographing a gamut of over sixty violent crime scenes over a two-year period. Hasidim was the result of approximately two years spent with insular Hasidic Jewish communities in Brooklyn and the Catskills. While attending weddings and other intimate celebrations, he shot a series of portraits.

Hasidim came to a close in the mid-1980s, when Weil became deeply involved in the emerging AIDS crisis. He joined ACT UP and co-founded New York City’s first needle exchange program. Coming to view activism and artistic practice as inseparable, he photographed friends struggling with HIV and AIDS. His final body of work was a five-part video installation depicting the clinical and emotional processes of a Special Ops military veteran’s gender transformation. Weil left the series unfinished at the time of his death in 1996.

Weil made conscious formal decisions to convey the texture of each community’s experience while also respecting their dignity and insularity. His process involved re-photographing images from Super 8 film strips, then scratching and overexposing the negatives. The resulting images are both revealing and obscured, an aesthetics of withholding that enabled Weil to carve out an ethical position within the confines of still photography. Compared to the work of other participant-observer photographers of his time, Weil’s oeuvre is unique in its physical manipulation of the medium and distinct terms of exchange between photographer and subject. Brian Weil, 1979-95: Being in the World brings forward the work of this powerful artist whose practice resonates in contemporary debates about the politics of sexuality, activist aesthetics, and photographic representation.

Brian Weil (1954 – 1996) was born in Chicago, where he briefly attended Columbia College and first began taking photographs as a teenager. During his career, he had twenty-one solo exhibitions at such institutions as Artists Space (1980), Moderna Museet (1989), the Saint Louis Art Museum (1991), and the Wexner Center for the Arts (1992). In 1991, the International Center of Photography organized an exhibition of his AIDS photographs, which was also the subject of a book, Every 17 Seconds (Aperture, 1992). Weil’s work is held in the permanent collections of the Jewish Museum, New York; the International Center of Photography, New York; the Museum of Fine Arts, Houston; and the Moderna Museet, Stockholm.

Stamatina Gregory is an independent curator and scholar currently based in New York; her work engages with the interrelationship of photography and politics. Her affiliation with the Institute of Contemporary Art at the University of Pennsylvania began when she was a Whitney-Lauder Curatorial Fellow from 2007 to 2009. While at ICA, she curated the exhibitions Carlos Motta: The Good Life, Tavares Strachan: Orthostatic Tolerance, and Kate Gilmore. As an independent curator, Gregory has organized group exhibitions at FLAG Art Foundation, Winkleman Gallery, PPOW Gallery, the New York Center for Art and Media Studies, Tyler School of Art in Philadelphia, and the Austrian Cultural Forum in New York. She was Deputy Curator of the inaugural pavilion of the Bahamas at the 55th Venice Biennale. Gregory is a doctoral candidate at The Graduate Center of the City University of New York.

Catalogue
Brian Weil, 1979-95: Being in the World is accompanied by a fully illustrated catalogue published by Semiotext(e). The catalogue features a scholarly essay from the curator; a historic interview between Weil and Claudia Gould, currently director of the Jewish Museum in New York; and oral histories that contextualize Weil’s work and life within a framework of dominant debates from the era.

Related Programs
The Santa Monica Museum of Art is pleased to partner with the Hammer Museum on an ambitious series of free public programs for Brian Weil, 1979-95: Being in the World. “Los Angeles,” says SMMoA’s Executive Director Elsa Longhauser, “is a multi-faceted, decentralized city with a rich history of exchange among its cultural organizations. Think of the Getty’s Pacific Standard Time initiatives, or SMMoA’s own partnerships with the LA Opera, the Center for the Study of Political Graphics, the Echo Park Film Center, and now the Hammer Museum. The open and inclusive spirit behind this inaugural west coast presentation of Brian Weil, 1979-95: Being in the World allows us to engage multiple perspectives and collaborate with such visionaries as theorist Sylvère Lotringer, poverty scholar Tiny aka Lisa-Gray Garcia, and activist Dont Rhine.”

Brian Weil, 1979-95: Being in the World Opening Reception | Santa Monica Museum of Art
Saturday, January 17 from 3–6 pm
3–4 pm, Exhibition Walkthrough
4–6 pm, Public Opening
Guest curator Stamatina Gregory and visual literacy pioneer Philip Yenawine lead a walkthrough of Brian Weil, 1979-95: Being in the World, carving out a space for engagement and discussion within a body of work that, by design, complicates the relationship between photographer, subject, and viewer. Gregory is an independent curator and critic, whose years of research on Weil’s oeuvre uncovered rare and previously unidentified self-portraits and brought his final, unfinished transgender project to light. Yenawine—an activist, longtime friend of the artist, and co-founder of Visual Understanding in Education (VUE)—has been at the front lines of the fight for arts education, expanded visual literacy, and intentional looking for two decades.

How to Shoot a Crime | Hammer Museum
A screening and discussion with Sylvère Lotringer and Chris Kraus
Tuesday, February 17 at 7:30 pm | Free admission | Details at hammer.ucla.edu/programs
Cultural theorist Sylvère Lotringer and author Chris Kraus discuss their collaborative film, How to Shoot a Crime (1987). Drawn from police archives and conversations with Brian Weil, who filmed the aftermath of over sixty murders in Miami, How to Shoot a Crime is a film is about framing death. This eighteen-minute experimental narrative inspires debates on surveillance, photographic journalism, media manipulation, and the role of the witness in artistic practice.

Kate Bornstein is a Queer & Pleasant Danger | Hammer Museum
A screening and discussion with Kate Bornstein and Sam Feder
Wednesday, March 4 at 7:30 pm | Free admission | Details at hammer.ucla.edu/programs
A self-described trans-dyke, reluctant-polyamorist, sadomasochist, and recovering Scientologist, Kate Bornstein has been instrumental in raising transgender visibility with her bestselling books, lectures, and performances. She is a role model for a generation of people learning how to redefine their gender and sexuality, and survive in a world that frequently greets ambiguity with hostility. Kate Bornstein joins director Sam Feder to discuss her meditative and playful documentary portrait, Kate Bornstein is a Queer & Pleasant Danger (2014).

How to Change the World | Hammer Museum
A discussion with Tiny aka Lisa Gray-Garcia, Dont Rhine, and Tony Valenzuela
Wednesday, March 18 at 7:30 pm | Free admission | Details at hammer.ucla.edu/programs
How do participatory art practices shift culture? Join a discussion with Tiny aka Lisa Gray-Garcia, poverty scholar and the co–founder of POOR Magazine/Prensa POBRE/PoorNewsNetwork and Homefulness Project, a landless peoples movement in the Ohlone territory known as Deep East Oakland; Dont Rhine, an AIDS activist and co-founder of the Ultra-red collective, which pursues the dynamic exchange between art and political organizing; and Tony Valenzuela, the executive director of Lambda Literary, an organization that supports and presents LGBTQ literature.

We Have Never Been Queer | Hammer Museum
A conversation with Beatriz Preciado and Jack Halberstam, moderated by Maggie Nelson
Tuesday, March 24 at 7:30 pm | Free admission | Details at hammer.ucla.edu/programs
What new understandings of self, life, death, and pleasure race through our era of pharmaceutical experimentation and ecological ruin? What futures, queer or otherwise, await us on the other side of this obliteration? Beatriz Preciado, author of Testo Junkie, makes a rare appearance in Los Angeles to discuss gender, futurity, and how to avoid the new normal, with gender studies guru Jack Halberstam and poet extraordinare Maggie Nelson, author of The Art of Cruelty.
www.smmoa.org