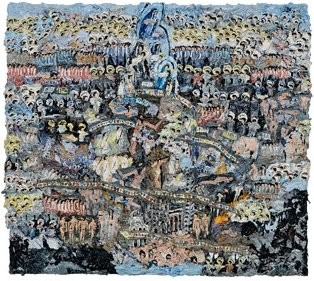 Jeni Spota is a painter who brings contemporary elements to classical themes, exploring traditional religious imagery, including the Crucifixion, Ascension, and Last Judgment, in a new way. In this exhibition of all new work, Spota fills her canvases with cramped figures engaged in frenzied activity, complete with choruses of angels, rows of haloed figures, and the Virgin floating, often repeatedly, in a mandorla, creating a heavy, purposeful yet intimate connection with the viewer that is rarely found in the Renaissance pieces that her works recall. Through her small canvases, the viewer is able to peer into another world, watching epic religious scenes play out with a surreal, impressionist twist. This is her first West Coast museum exhibition.
Adopting the flattened pictorial space of medieval icons combined with the rich, globular application of paint, Spota creates an ecstatic, almost abstract surface. Her brushstroke technique, in which paint is heaped on in indulgent, cake frosting-like daubs and layers, creates palpable moment, spiritual surge, and reverie.
Mid-century figurative artists like Frank Auerbach, Jess, Bob Thompson, Lester Johnson and David Park inform Spota’s paintings, as well as do such Renaissance masters as Giotto.
The artist was born in New York and lives and works in Chicago, where she earned an M.F.A from the School of Art Institute. She earned her B.F.A. at State University of New York at Purchase.
www.smmoa.org