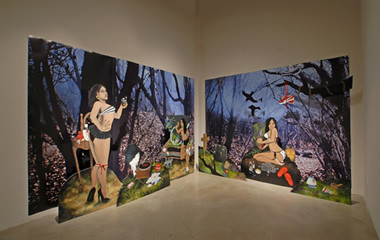 For Project Room 2, Holland will construct a shallow-relief stage set with a large photomural and numerous smaller freestanding sections. An elegantly presented marriage of opposites, Black Magic Woman is replete with an abundance of seductive and also repulsive images, and possesses the eerie, uncanny quality of nineteenth-century gothic ghost stories. With its title inspired by the Santana song of the same name, the work portrays three contemporary Santeria priestesses practicing in the spooky, partially decayed landscape of a Louisiana graveyard, complete with Spanish Moss and creeping mist. In its form, the installation alludes to the constructs of the theatre; in its content it addresses themes of class, racial stereotyping, consumerism, death, and decay. Holland created Black Magic Woman specifically to accompany the exhibition by William Pope.L on view in the museum’s main gallery.

Holland received her B.A. in Visual Arts from Brown University and her M.F.A. in Painting and Printmaking from Yale University School of Fine Art. She has participated in group exhibitions and has received numerous awards for artistic distinction. Her work is in many private collections. Holland lives and works in Los Angeles, California.