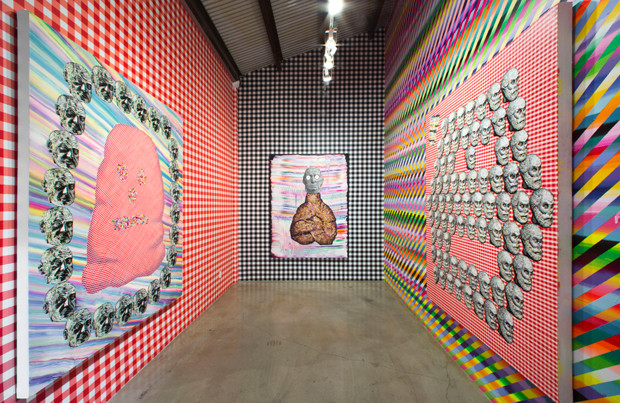 Fluorescent washes of color and intricate patterns of stripes, chevrons, and plaids provide the backdrops for the work. Head-Face #4, as one example of Zefeldt’s jubilant exploration of paint, is part still life part portrait, set upon a dizzying gingham background. Dozens of identical Classical busts, each painstakingly hand-painted, crudely outline a stick-figure face with gaping holes for its eyes and mouth. Zefeldt describes his paintings as windows into fictional worlds. With the steady hand of a masterful painter he plays with a reliance on simple forms reminiscent of Microsoft’s Paint, complete with pixel-induced shakiness and clip art-style copying and pasting.

The paintings and patterns in Forms Forming Forms call up the visual lexicon of early 1990s computer hackers, who created viruses and other self-reproducing computer programs, which used excess and obfuscation to distract as they wiped out memories. Using this just-outdated aesthetic as a Trojan horse, Zefeldt successfully invokes the digital age while ultimately emphasizing a love of paint. His still lifes encompass all of paint’s visual tools from abstraction to figuration: at times he piles paint directly onto canvas to emphasize its literal, sculptural qualities, but he also paints narratives with illusionistic, three-dimensional figures in two-dimensional planes. In Zefeldt's paintings, repetitive decorous patterns are transformed from the monotonous into the maniacal.

As a beacon in SMMoA’s Fall 2013 exhibition schedule, Forms Forming Forms invites viewers to consider the crisis of individuality in an era of instantaneous image sharing and replication. The project reflects SMMoA’s unique capacity as a kunsthalle to collaborate with contemporary artists and highlight ambitious, never-before-seen artworks and installations.

Mathew Zefeldt is an Assistant Professor in Painting and Drawing at the University of Minnesota. He received his MFA at the University of California, Davis in 2011 and was awarded the Dedalus MFA Fellowship in 2011. Zefeldt has had solo shows at Swarm Gallery in Oakland, Eduardo Carrillo Gallery in Santa Cruz, Skinner Howard Gallery in Sacramento, and Michael Rosenthal Gallery in San Francisco; he will be included in a group exhibition at M.O.H.S. in Copenhagen in November 2013.

Jeffrey Uslip was born in 1977 and lives and works in New York City. At SMMoA, he most recently organized Joyce Pensato: I KILLED KENNY, Michael Queenland: Rudy’s Ramp of Remainders, Agnes Denes: Body Prints, Philosophical Drawings, and Map Projections, 1969 - 1978, and Samira Yamin: We Will Not Fail. Uslip has also organized exhibitions for PS1/MoMA, New York; Artists Space, New York; Columbia University's Graduate School of Arts and Sciences, California State University, Los Angeles; and LA><ART, Los Angeles. He has lectured at the Yale University School of Art, New Haven, and the Whitney Museum of American Art, New York, and is an online contributor to Artforum. Uslip is currently a PhD candidate at The Institute of Fine Arts, New York University.