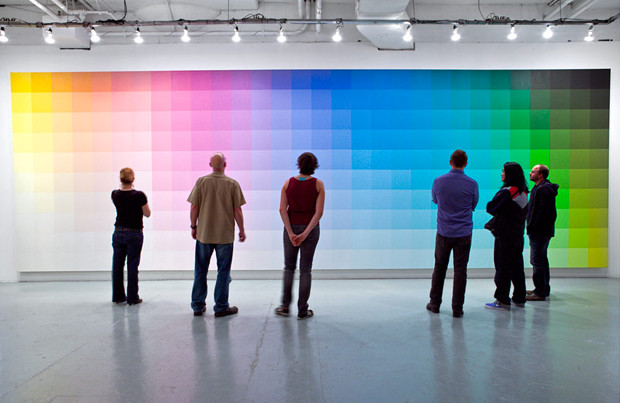 Robert Swain: The Form of Color is an immersive, site-specific exhibition grounded by the artist’s forty-five years of research into the phenomenology of color. The Form of Color is Swain’s first solo museum exhibition in California, and is comprised of interlocking, modular paintings created specifically for the Museum and the quality of light in Santa Monica. Each composition is made up of individual twelve by twelve inch squares of color, and measures up to seventy feet in length. The result is an all-encompassing visual and physical encounter—a journey into the sublime.

Robert Swain has devoted a lifetime to the study of color, and inspired generations of color painters in the process. As a young artist in the 1960s, he was influenced by the chromatic and compositional strategies of Pierre Bonnard, Georges Seurat, and Paul Cezanne. Over the next four decades, Swain combined a modernist’s medium specificity with postmodern investments in both systems of knowledge and art as experience. The work on view at the Santa Monica Museum of Art is a massive network of pure paint, a comprehensive survey of the color system the artist began developing in 1973 with a research grant from the City University of New York. Swain’s color system is an index of 4,896 isolated chromatic units, along with accompanying records of their evocative properties. The multi-directional grids in The Form of Color, plotted according to value and saturation, are designed to intensify collisions and complements among hues and induce specific visceral responses. In Swain’s system, such responses take place when an individual pigment’s radiant energy—a factor of its wavelength in the electromagnetic spectrum—is transferred to the viewer.

“Color,” says Swain, “is a form of energy that stimulates our perceptual processes and is instrumental in conveying emotions.” Viewers of Swain’s work experience color as an active perceptual process, an event that happens in real time. Like multi-colored test patterns used to calibrate projectors and printers, Swain’s paintings reset and rejuvenate the human mind, eye, and body. Considered head-on and at various angles, the squares dissolve into each other, betray their hard-edged boundaries, and curve away from the walls. They adjust to viewers’ locations and the time of day, alternately projecting and absorbing the natural light that floods the Museum. Robert Swain: The Form of Color transcends the precise system and decades of study informing it, providing a uniquely serene and spiritual experience for each individual viewer. For more information on the artist, please visit
robertswainnyc.com.

In conjunction with the opening reception for The Form of Color, the Santa Monica Museum of Art presents Color, Light, and Consciousness: A Conversation with Robert Swain, Executive Director Elsa Longhauser, and Curator Jeffrey Uslip from 4 to 5pm on Saturday, May 17.

About the Artist
Robert Swain was born in 1940 in Austin, Texas and lives and works in New York. He completed his education at the American University in Washington, D.C. in 1964. Since moving to New York City in 1965 he has exhibited regularly and participated in over ninety solo and group shows. He has been awarded ten major commissions and architectural installations and is the recipient of many prestigious awards and grants, including the grant in painting from the John Simon Guggenheim Foundation, the National Endowment for the Arts, and the Distinguished Teaching of Art Award from the College Art Association. A total of 284 of his works can be found in major private and public collections such as the Albright-Knox Art Gallery, the Denver Art Museum, the Detroit Institute of Art, the Everson Art Museum, the Columbus Museum of Art, the Corcoran Gallery of Art, the Milwaukee Art Center, the Virginia Museum of Fine Art, and the Metropolitan Museum of Art.

About the Curator
Jeffrey Uslip was born in 1977 and lives and works in New York City. At SMMoA, he most recently organized Michael Queenland: Rudy’s Ramp of Remainders, Agnes Denes: Body Prints, Philosophical Drawings, and Map Projections, 1969 – 1978, Samira Yamin: We Will Not Fail, Joyce Pensato: I KILLED KENNY, Xylor Jane: Sea Legs, and Keltie Ferris: Doomsday Boogie. Uslip has also organized exhibitions for PS1/MoMA, New York; Artists Space, New York; Columbia University’s Graduate School of Arts and Sciences, California State University, Los Angeles; and LA><ART, Los Angeles. He has lectured at the Yale University School of Art, New Haven, and the Whitney Museum of American Art, New York, and is an online contributor to Artforum. Uslip is currently a PhD candidate at The Institute of Fine Arts, New York University.