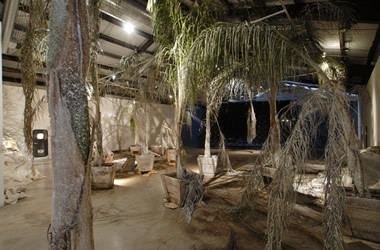 
I am trying to imagine a possible world while living in this world, the so-called Western or real world. I am imagining a world in which there is art, and the entity “white people” is in the condition of “after,” that is, obsolete. The time is probably post-empire. Maybe whiteness has gone subterranean à la Ralph Ellison and is pondering its fate...

—William Pope.L
William Pope.L—Art After White People: Time, Trees, & Celluloid... will include: a large-scale installation, The Grove; a set design and video, APHOV (A Personal History of Videography); as well as a set of digital collages in light boxes entitled The Semen Pictures. Created especially for SMMoA, these works will constitute the first major West-Coast museum exhibition by this artist, who has consistently worked on the edge of the art world, often literally integrating his vision into the physical fabric of the social landscape. Ironically self-dubbed the “friendliest black artist in America,” Pope.L’s practice has continually challenged and confronted social inequity and the bogus construction of difference with dark humor and biting critique.

The Grove, APHOV, and The Semen Pictures powerfully broaden Pope.L’s artistic inquiries and expand the formal language of his oeuvre. All parts of the installation investigate themes of time, theater, masking, and transformation. As visitors enter the main gallery, they will see The Grove, an installation of an interior garden of potted palm trees—13 to 17 feet high—hand-painted and power sprayed white—a spectral fairytale forest of glowing trees within the darkened museum space. An exploration of the social, psychological, and environmental consequences of human willfulness, the palms in The Grove will gradually die because of their toxic ‘skin.’

Beyond The Grove, visitors will continue their journey through the gallery space and approach the flickering glow from the projected video, APHOV, presented on a free-standing screening wall, constructed of formidable, wooden struts reminiscent of an old-fashioned drive-in theaters or highway billboards. APHOV is a formally constructed cinematic performance about performance, in a video about video. On screen, viewers will see a man wearing a bulbous latex mask resembling former Secretary of Defense Donald Rumsfeld. Behind him, they catch glimpses of the man’s “lair”—strewn with piles of items such as VHS tapes, cans of food, and cardboard storage boxes. The sound of the man’s breathing grows as his mask weeps streams of glutinous artificial blood. The viewing area for APHOV will be littered with furniture—dining room chairs, sofas, cribs, and high chairs, and a hospital bed. Through the semi-darkness, viewers will also discern around them mysterious, locked, industrial doors through which they can only peek at an endless warren of cardboard storage boxes. Though Pope.L’s piece has social and political overtones; the work is as much about the medium of video and the passage of time as it is about narrative. The video is simultaneously ambiguous, melodramatic, and ritualistic.

As viewers navigate beyond APOV, they will encounter Pope.L’s final intervention—The Semen Pictures, figurative collages with human hair and semen, digitized and placed within light boxes. These works represent Pope.L’s earliest attempt to use organic material, reinforce his explorations of ritual coating, and illustrate his interests in masking and masquerade. Like The Grove and APHOV, The Semen Pictures feature layers and veils—in process, image, and material. These altered and sometimes obfuscated “portraits” are then made into sculptural objects, as they are contained within the light boxes.

William Pope.L was born in New York City in 1955 and received his MFA from the Mason Gross School of the Arts at Rutgers University in New Brunswick, New Jersey in 1978. Throughout his career, he has tackled social issues through a rich range of media including performances, installations, painting, drawing, web casts, and writing. In an attempt to defy outmoded social stereotypes and the neatly packaged objects and ideas of American consumerism, Pope.L has devoured and regurgitated The Wall Street Journal (Eating The Wall Street Journal); crawled through gutters on his belly—wearing a Superman suit with a skateboard strapped to his back—from the Statue of Liberty to the Bronx (The Great White Way); walked around Harlem wearing an enormous white cardboard penis (Member [a.k.a. “Schlong Journey”]); and tied himself with sausage links to a Manhattan ATM wearing a skirt made of dollar bills that he attempted to distribute to passersby (ATM Piece). For a recent project called The Black Factory (BF), Pope.L customized a UPS-style truck, trained a three person crew and toured the country mobilizing people to create, to explore their ideas about community, and to assess their own notions of difference. One of the most popular activities of the BF is Black Object Donation, where people donate any object that represents blackness to them. During the tour, the BF collected and displayed over 600 such objects creating a material picture of race attitudes in the United States. Pope.L’s work can be uncomfortable, confrontational, and abject, but it is also human, humorous, and witty—often addressing afrocentrism or class struggle as much as the white American power structure. Pope.L has had recent solo exhibitions and performances at the University of Massachusetts, Amherst; The Project, New York; MC Kunst, Los Angeles; and Kenny Schachter ROVE, London. He has also been featured at Yerba Buena Center for the Arts in San Francisco, the Cleveland Center for Contemporary Art, and The Drawing Center in New York. His writing has been published in P-Form, M/E/A/N/I/N/G, and by Exit Art. Pope.L’s awards include fellowships from the National Endowment for the Arts and the Maine Arts Commission, a Franklin Furnace Award, a Mid-Atlantic Residency, and most recently a fellowship from United States Artists. Pope.L currently teaches Theatre and Rhetoric at Bates College in Lewiston, Maine.

Art After White People: Time, Trees, & Celluloid... will be accompanied by an exhibition catalog published by SMMoA, that will feature the most in-depth interview to date with the artist, and essays by LAXART director Lauri Firstenberg, and environmental historian Wade Graham.
www.smmoa.org