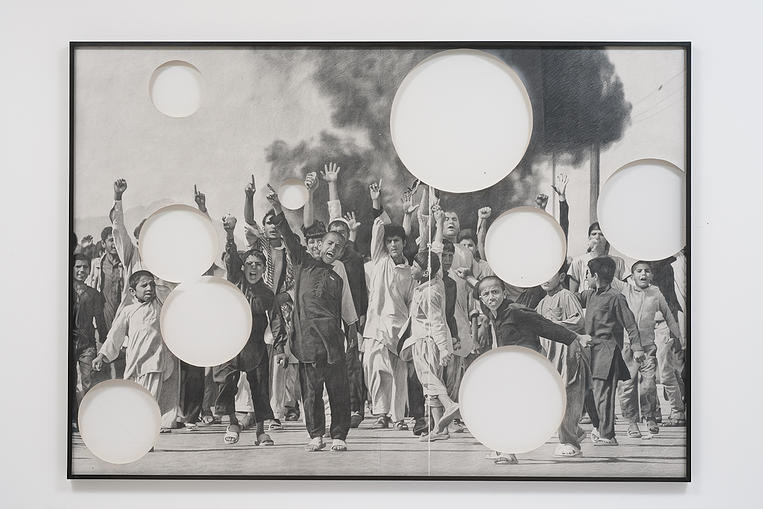 Karl Haendel (b. 1976 , New York) collects countless images only to later reproduce them in his hyper-realistic drawings. Through extreme scaling, Haendel's works create monumental objects often displayed as one whole installation. Haendel's new exhibition at Sommer Gallery, titled "People Who Don't Know They're Dead", explores fear and specifically cultural phobia. Haendel further questions the manner in which fear and death are presented in current media .Two dominant colors in his current exhibition are black and yellow, relating to the colors of warning tape used by U.S. police in crime scenes, as well as to Batman – an American culture icon, a theme common in Haendel's work. One connecting thread in "People Who Don't Know They're Dead" is an event that took place on July 19, 2012 in Aurora, Colorado, where a man killed 12 people and wounded 70 during a midnight screening of the film "The Dark Knight Rises". This case once again raised questions of random violence, the impact of personal isolation on society, the handling of media with such events and the links between all of these and American culture. Karl Handel has previously shown at the Museum of Contemporary Art in Los Angeles (2006), the Guggenheim in New York (2010), Museum of Modern Art in New York (2007), New Museum New York (2010), Yvon Lambert Gallery in Paris (2011, 2013), the Lyon Biennale, France (2013) and in the current Whitney Biennial in New York (2014). He lives and works in Los Angeles.
www.sommergallery.com