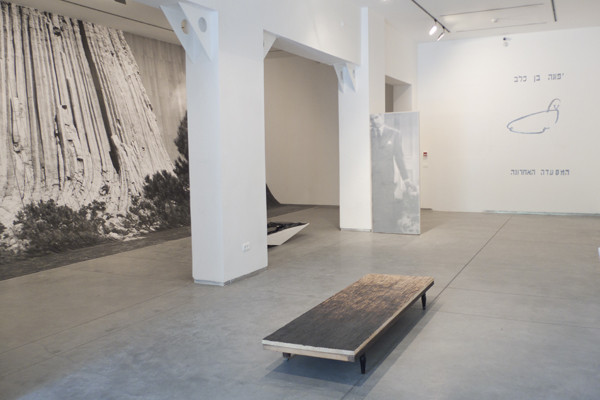 Sommer Contemporary Art is pleased to announce the group exhibition Lobby, featuring artists: Naama Arad, Lior Ophir, and Tchelet Ram. Lobby is part of a series of exhibitions that have taken place at gallery for the past three years. In each exhibition from the series, three artists were displayed in a common space (The Invisible Snake Show, 2008: Michal Helfman, Sharon Yaari, and Itzik Livneh; Fixed Variable, 2010: Haim Elmoznino, Tamar Harpaz, Lior Waterman; and Adequate, 2011: Michaela Eichwald, David Lieske, Nick Mauss). The series intends to expose the process of art making, to allow the spectator to look inwards at the backbone of production, and to provide an updated view of what is being created here and now. The installation of different works shown side by side expose and investigate qualities and nuances of the artists work, while at the same time it emphasizes different dialogues that are possible between generations, themes, and styles. In addition, from a wider point of view, the series introduces questions regarding contemporary art trends as well as the choice of certain important landmarks in the history of art, finding the importance of material while revealing its unique qualities and a continued examination of its boundaries and limits.

The current exhibition includes three artists who have recently graduated from Bezalel Art Academy. The name Lobby refers to a passageway or waiting area that serves as junction between an exterior and interior space. This is a place that introduces guests into the main area where you are often confronted with disjointed and ephemeral interactions. At the same time, the name brings the artists together (maybe ironically) as a collective with a common agenda. The three artists create independently using different visual languages, but it is evident that they are all coming from a similar origin, deliberately grounded on what was left by their predecessors- whether these are artistic traditions, cultural icons, or the political and social framework from which they work in. The artists mediate cultural differences and defy constructed hierarchies each in their own way.

Naama Arad (b. 1985) presents a large wall installation, reminiscent of a curtain, made out of hundreds of Xerox copies that once assembled together create an image of Devils Tower Mountain, a national monument in the state of Wyoming. We recognize the image from search engines, vacation brochures, and from enlarged prints like the kind we find at airports or travel agencies. Similar to Arad's previous work, she uses simple technical means and investigates where inside and outside merge. The piece integrates itself with the gallery wall draping down from the ceiling as if threatening to conquer the entire gallery space (in a previous work of Arad, Habitat, Xerox copies describing the interior of a home were glued on the windows of a house facing the outside). Arad has a continuous dialogue of modernist European tradition of architecture and design while specifically relating to the work of Mies van der Rohe and his well-known glass houses. Another work presented by Arad in this exhibition confronts architectonic elements with questions of identity: a male figure from the 1950's is trapped between a house door and a layer of wax, taking his image out of focus and freezing it. Her work proposes a fascinating point of view of emotions such as passion, and the moment of falling in love with an Internet image and the repetition of this moment into a work of art. ®

Tchelet Ram (b. 1982) presents two sculptures functioning as a single work. The first is made out of a wooden board resting on a low bed. Using engraving and burning techniques Ram creates a texture in the wood that is reminiscent of veins and arteries. The board is a continuation of the furniture on which it is laid, fitting in size and material, as a body, or conversely as a symbol for the absence of a body. The second sculpture is a plaster cast, identical in dimensions to the first work, where a small black pond creates a reflection of the space and the spectator. Additionally, the sculpture echoes the missing body, a reminder of a tomb or grave, and the pool carved inward gives the piece a lyrical aspect of movement. Ram's work deals with time passing by and memory, and in the attempt to give something traumatic the appearance of poetical beauty; in the existential tension between life and death, and it's cultural performances – such as architectonic motifs, images, old furniture, and the act of art making.

Lior Ophir (b. 1981) presents an audiovisual installation that includes an original radio program, photograph, graphite wall sketch, and texts. Using deliberate and concise language, Ofir digs deep into the open wounds of Israeli society. In an anachronistic way, Ofir examines the state of Israel along with different Jewish historical events; a series of conflicts and struggles that deal with ownership of space and material and are based on the human inclination towards self-annihilation. An unrealized fantasy regarding sex, society, and art appear in many of his sketches and writings: 'functional' sexuality, the myth of the artist committing suicide, and the unfulfilled dream of art. The topics and events that occupy Ofir’s work appear in a disturbing closeness to one another. The close circle of human existence uses the artist’s body as an object and a resource for the continuation of its reality– all of which is revealed out of the excess of events. While focusing on the status of human matter, Ofir's work speaks a direct language filled with vulgar humor bringing the observer into a state of embarrassment and reflection.
www.sommergallery.com