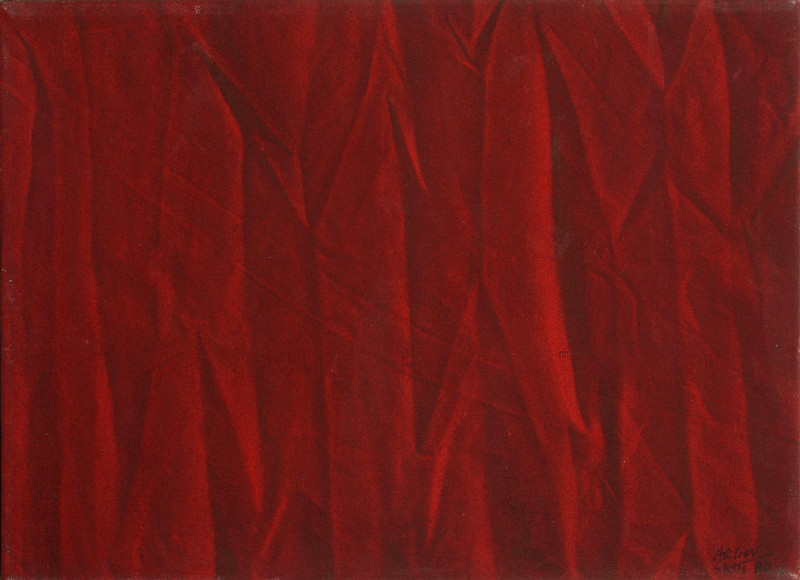 Sommer Contemporary Art is pleased to present the solo show of the late artist Michael Argov. The exhibition will reveal his last body of work which has never been exhibited before. These works enlighten his artistic and timeless legacy, and are more than ever unique and relevant, three decades after his passing.
In recent years, the motif of the fold is being embraced by a new generation of international contemporary artists, such as Wolfgang Tillmans, Walead Beshty, Rudolf Stingel and Tauba Auerbach.
Folding as action, illusion, and symbol has appeared throughout contemporary art and literature, from Simon Hantaï’s literal process of folding the canvas, dousing it in oil paint, then unfolding it to reveal inadvertent yet lyrical patterns, to Tauba Auerbach, who lightly sprayed a folded and re-flattened canvas from various angels to produce the impression of indirectly reflected light.
Michael Argov (1920-1982) was born in Vienna, Austria. Throughout his extensive career, he was constantly exploring the boundaries of plastic art. Ranging from painting to sculpture, Argov was always intrigued by the perception of dimensions.
His early body of work was mainly figurative, canvases depicting landscape, portraits and female nudes. Argov was influenced by the "School of Paris" (L'ecole de Paris) and French paintings fron the beginning of the 20th century. During the 1960's, a revolutionary turning point took place in his work, when Argov turns to abstraction and minimalistic color fields. Evolving from vast spreads of solid pigments, Argov immerses himself in material-lyrical abstracts, shaping formats of geometric abstracts employing novel materials such as fiberglass, aluminum, stainless steel and collages combining fabrics and sand.
In the late 70's, Michael Argov returns to two dimensional paintings but this time with a new perception and technique. By folding canvases to produce new forms in three dimensions, he explores the act of folding as both concept and formal process, stretching the barriers between the real and the imaginary. Argov investigates the mechanism of the paint, creating an infinite world of ridged surfaces, ranging through the folds of time and space.
Michael Argov's works were exhibited in museums and exhibitions in Israel and abroad, including The Tel Aviv Museum of Art, Helena Rubinstein Pavilion, Venice Biennale, Haifa Museum of Art, Musée National d'Art Moderne, Paris, Museum of Modern Art, Sao Paulo, Weisbaden Museum Germany and many more.
www.sommergallery.com