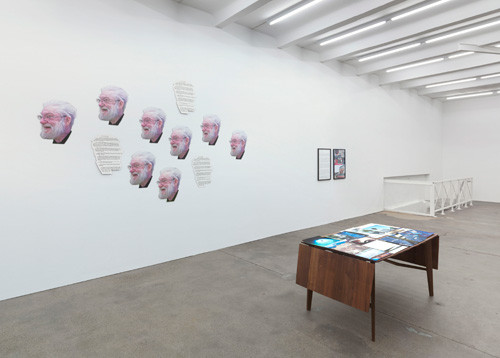 With collaborative editions by Nayland Blake and Lynne Tillman, Dan Graham and John Miller, Chris Kraus and George Porcari, Raymond Pettibon and Dodie Bellamy, posters on a table by Jorge Pardo, a book by Liam Gillick, films by Veronica Gonzalez-Peña and much much more.

Sommer & Kohl are happy to present Los Angeles based rockypoint Press in Berlin for the first time.

rockypoint Press is a series of artist-writer collaborations curated by Veronica Gonzalez-Peña, with help from friends in Los Angeles and abroad, including master silkscreener Christian Zickler, the artists George Porcari and Marwa Abdul-Rahman, and countless others. Together with these various friends, she has made books and posters, organized readings, produced limited edition prints, and now there is a film. All the principal actors in Like A Shadow are artists and writers, acting for the first time... As in all the projects, the film is the result of people entering a mutual space without knowing what would result, but in the spirit of making something good happen...

On Saturday 16 March at 3 pm, Lance Olsen will be reading form his novel in progress, Theories of Forgetting, which is, among other things, the story of a middle-aged filmmaker, Amelia, struggling to complete a short experimental documentary about the Spiral Jetty. Joining him will be Veronica Gonzalez-Peña, founder of rockypoint Press, reading from her forthcoming novel The Sad Passions, out on semiotext(e) this June.
sommerkohl.com