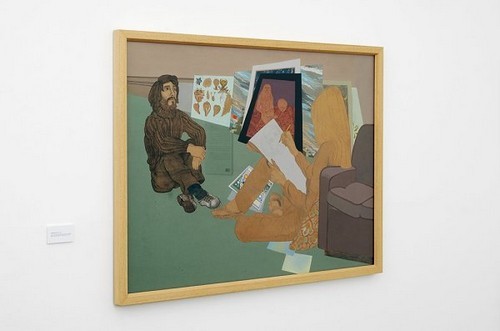 Throughout his career, Alasdair Gray’s work in art and literature have had interwoven paths, overlapping in form and content. In his books, word and image are juxtaposed and combined to form epic narratives that have been compared to the work of fellow artist-writers, such as William Blake. Gray’s unique vision in art and literature convincingly blend the mundane and exotic to fantastic effect.
‘Now and Then’ is Alasdair Gray’s first solo exhibition at Sorcha Dallas and will bring together a series of previously unseen works from 1972. In 1971 Malcolm Hossick, of BBC Scotland, planned a short film (‘Now and Then’) focusing on one woman’s memories of a doomed love affair. The film was to be shot in one room of a typical west end tenement, with Gray’s images forming the flashback sequences o of the central female character. Liz Lochhead was commissioned to produce s series of new poems to be narrated over Gray’s images. Compositionally the images Gray produced are some of his most ambitious and complex to date and exhibit his unique and distinctive style.
Unfortunately the film was never completed, however this exhibition will exhibit all works from the series, as well as producing a catalogue combining Gray’s images with Lochead’s texts..The catalogue will be launched at the private view and then available at the gallery thereafter.
Alasdair Gray was born in Glasgow in 1934. He has worked as a teacher, painter, illustrator, playwright, scene painter, essayist, poet, novelist and muralist (the latest being the monumental decoration of Glasgow’s Oran Mor). In Autumn 2008 ‘A Life In Pictures’, a visual biography of Gray’s life and work will be published by Canongate. He lives and works in Glasgow and is represented by Sorcha Dallas.
Private View, Saturday 12th April 2008, 7-9pm Until 17th May 2008
www.sorchadallas.com