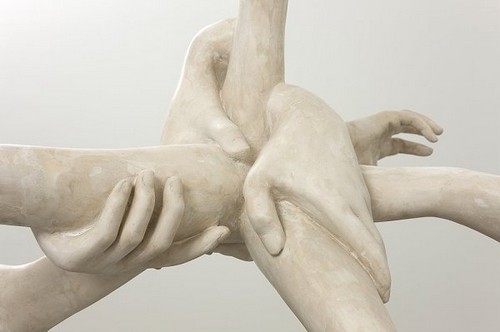 © Annette Ruenzler
Untitled, 2009
plaster, construction material and rope
80 x 80 x 70 cm
ANNETTE RUENZLER
"The power to faint at will - or not"

Annette Ruenzler (born Speyer, Germany 1968, lives and works in Berlin) studied at the Kunsthochschule, Berlin. In 2008 she had a Solo Position at Art Basel with Galerie Kamm. This is Ruenzler’s first UK solo show.
Ruenzler’s accomplished practice makes visible, with subtle power, the problematic presence of decorative in the modern, and the wild in the civilized. In her drawings, sculptures, silk-screen prints and installations, Adolph Loos’ functionalist assertion that “ornament is crime” appears subject to an insidious vandalism. But the droll products of Ruenzler’s fantasy world are carefully poised between the material rigours of Arte Povera and the fairytale excesses of Meret Oppenheim’s or Dorothea Tanning’s sexy surrealist objects. Throughout Ruenzler’s practice, materials reminiscent of a bridal lexicon - glass, ceramics, satin, – gleaming in their celestial whiteness -are placed in anxious but convincing union with the austerity of office-world design and occasional traces of the human body, resulting in quietly troubling none-sequiturs of taste, gendered aesthetics, and style.
For her solo exhibition at Sorcha Dallas, ‘The power to faint at will- or not’, Ruenzler will present a series of sculptural works and prints that continue her interest in the dichotomy between form and function. The title suggests the idea of transforming a weak position into one of strength. This ability to ‘faint at will- or not’ suggests a more tactical approach to consciousness, with this being an active choice. The exhibition includes a pair of mirrored peep-hole sculptures whose refracted surfaces create not only an illusionary world within them but operate as a barrier against another, more sinister one, trying to get in. The installation creates a narrative where familiar objects are reworked to dramatic effect and positioned to create a balance where non-dominance is a valid perspective.
Courtesy of Galerie Kamm, Berlin. Supported by the Goethe-Institut, Glasgow.
www.sorchadallas.com