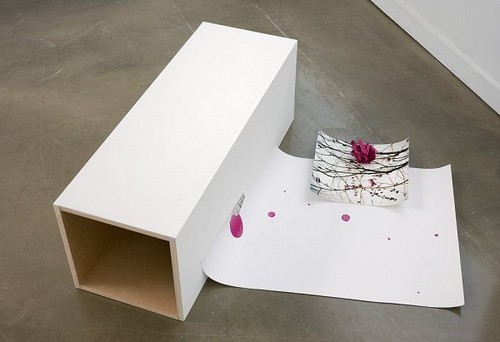 Jimmy Robert (born Guadeloupe, France in 1975, lives and works in Brussels) is one of France’s most exciting emerging artists. He has in recent years exhibited to critical acclaim at 5th Berlin Biennale; Cubitt Gallery, London; Neuer Aachen Kunstverein, Germany; CAC Bretigny, France and Diana Stigter, Amsterdam. This will be Roberts first Scottish solo show.
Robert addresses the fragility of representation through photography, performance, and film. The artist often inserts his own presence into installations of found imagery, which he has transformed and restaged, generating an intriguing dialectic of alienation and belonging, of “physical” and “political” action. His films, prints, happenings and publications focus around the point at which the transient characteristics of time-based-acts become institutionally solidified as writing, photography and public media.
The image-object relation is crucial to Robert in this respect. Even his collage works transcend their image-status and reach out towards three-dimensionality, only to be collapsed back into their pictorial limits. Cut and folded into three-dimensional shapes, they are bandaged with masking tape, before often being scanned and reprinted as flat wall-mounted pictures. Adhesive tape also featured as a cruel component of a recent performance during his show ‘Figure de Style’, at London’s Cubitt gallery in 2008. Actualising the taboo (as Kirsty Bell noted in frieze, May 2008) of the ‘politics of touching and being touched’, the performance took as its starting point Yoko Ono’s seminal Cut Piece (1964). But instead of the sharp tailor’s scissors offered Ono’s participants, Robert’s spectators were invited to rip-off pieces of tape, which fabricated a make-shift carapace around his otherwise naked torso. The audience’s vulture-like actions were meanwhile reflected back at them via press reviews of the original performance, which Robert read aloud as he underwent his self-reflexive Promethean ordeal.
For his solo exhibition at Sorcha Dallas, ‘Grey Flannel Suits Any Man’, he will be exhibiting a series of two and three dimensional work incorporating found and personal photographs, sculptural and drawn elements. There will also be a unique performance on the opening night at 8.30pm.
Supported by Paris Calling Ltd and Alliance Française
www.sorchadallas.com