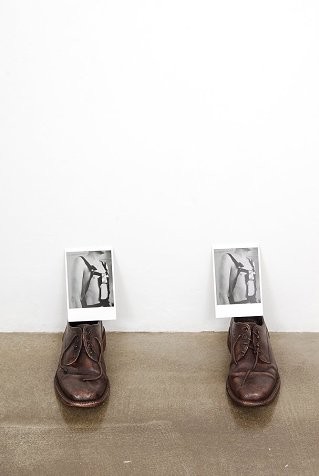 I decided to write my press release in the form of this letter to you. Rather than writing in the third person, it seemed to make sense to try and explain with a more open voice what I’m thinking and why the work is needing to question and explore the use of a subjective voice too.
Working towards the Outsider exhibition in August, I’ve been thinking about my last show at Sorcha Dallas, Glasgow (‘Participant’, 2004) and asking what it can mean to exhibit work in the same, albeit extended, space four years later? Moving from Participant to Outsider, I wanted to react against that point in time and use the exhibition to respond not only as I have been doing to works from art history but more directly to my own practice. So the beckoning hand that invited an audience to ‘participate’ (or at least, entertain that notion) becomes a closed palm; an open platform is now a barrier. I am not interested in making life easier for an audience. Both the viewer and myself are essentially operating outside of the work. That doesn’t mean this exhibition can’t be an active or absolute experience. I’ve been thinking about the words of Albert Camus, when he claimed that “ in our society any man who does not cry at his mother’s funeral is liable to be condemned to death”. (1)
We’ve talked about it before, but I am aware that there is an increasingly prevalent personal voice in my own practice (despite, or perhaps because of the reliance on a historical context to work within or against). I’m interested in using ‘Outsider’ and the dialogue around it, to question the role and possibilities for self representation and the subjective voice today. Carolee Schneemann (2) has talked about turning the experiences behind the working processes into the work itself. Is that still a relevant need? How does my voice verbalise itself in relation to that idea?
For this exhibition, I’ve been working with reproductions of a series of images by the artist, Franz Gertsch (3). They were mostly made in the 1970s/80s and depict incidental moments with the candid eye of a camera, rendered in paint, pencil or through printmaking, employing great attention to detail on a monumental scale. Gertsch describes himself as a tool in relation to the model, expressing a desire to renounce responsibility for the things depicted and to liberate self from emotionalism. I’m attempting to challenge where my own making can situate itself in response to that idea. Why liberate self from emotionalism? A man who does not cry at his mother’s funeral is not lacking emotion. Surely there is more truth in a blockage than false tears. What do you think?
By spilling my own ‘everyday activities and detritus’ over Gertsch’s images, and investing them with a similar sense of labour and intensity of detail, I am both attempting to question and take a form of ownership over his images (and attitude), whilst opening myself to the same problems. I keep returning to a passage by Schneemann in which she challenges the paradox that we deal with images- painted, sculpted, performed - as ‘reality’.
“As if paint, plaster, celluloid, stone and paper exist to convince us of a life force as vital as our own flesh and blood... and subject to our own moralities! This is as child-like as spanking our dolls for making imaginary pee-pee; and shelters an unconscious, debased primitivism surrounding endowing inanimate objects with projections of our repressed vitality.” (4)
I hope the four drawings, one print and two objects I will be exhibiting, are as provocative of questioning as Schneemann suggests and can be interrogated through eyes, which demand as much above.

Be great to hear your thoughts.

Quoted from the Afterword for The Outsider, Albert Camus, Penguin Books, 1983
Born in 1923, America, Carolee Schneemann has been a germinal figure in 1960s performance and body art. Since the sixties her work has continued to challenge the possibilities of art making in relation to feminist thinking, questioning her own position as both subject, object and maker.
Born in 1930, Switzerland, Franz Gertsch, is one of the most significant Photo- or Hyperrealist artists and has generated an oeuvre of monumental paintings, drawings and prints.
Quoted from More than Meat Joy, Carolee Schnneemann, Documentext,1979, 1997
Born in New Zealand in 1977, Davis completed her BA Printmaking in 2000 and an MPhil in Art in Organisational Contexts in 2001 at Glasgow School of Art. Recent group exhibitions include De Appel, Amsterdam, Simon Lee, London, Tanya Bonakdar, New York and Wilkinson, London. In 2006 Davis had a solo show at the Kunsthalle, Basel and the following year was selected for Art Now, Tate, London. Recently she has exhibited at Galerie Kamm, Berlin and has been awarded a residency at Cove Park, in Argyll and Bute, Scotland. Davis is based in Glasgow and in September will start a three month residency at The Banff Arts Center, Canada.
Private View, Saturday 23rd August 2008, 7-9pm Until 27th September 2008 Gallery Hours, Tuesday-Saturday 11am-5pm and by appointment
www.sorchadallas.com