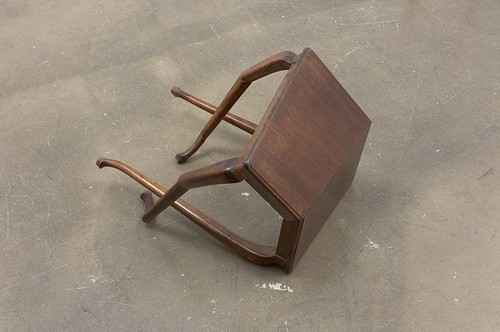 Sorcha Dallas ‘Levitation Party’ A solo show by Raphael Danke 4th June – 9th July 2010
Sorcha Dallas is pleased to announce the second solo exhibition in the gallery by the German artist Raphael Danke, ‘Levitation Party’. As the title suggests this exhibition brings together a range of objects and collages concerned with the idea of suspension and metamorphosis.
In the first gallery are exhibited a series of framed ink drawings on book pages entitled ‘Studie/Study’. These pages are taken from a gymnastic book printed by the German Democratic Republic (GDR) in the 1980s. Danke has meticulously drawn tabletops and legs onto the existing images resulting in the figure almost decomposing through dance into architectural forms. They are also suggestive of paranormal activity, of a materialized spirit being released yet harnessed within a physical form. In the same space a ‘Levitation Object’ is displayed. Onto the wooden structure Danke has placed copper elements, creating a conduit, suggestive of electricity or energy being transmitted. The idea of paranormal activity is again reinforced through the object’s title.
In the second gallery Danke displays a series of floor-based sculptures and a new C-print. Each of the sculptures are titled ‘Subject’ and link to ideas behind the drawings in the previous room - subjects becoming objects and vice versa. Through reattaching the existing legs Danke anthropomorphizes these static forms, animating them into objects charged with physical and spiritual potential. Danke cites the influence of Freud’s Dream Theory and spiritual architecture on this latest body of work. The way dreams are compartmentalized into architectural forms (rooms) and buildings are built with spiritual principles in mind. In this installation figures appear as furnishings with objects taking on distinctly human auras.
Raphael Danke was born in 1972 and graduated from the Kunsthochschule, Berlin in 1999. Since then he has exhibited in group shows at Johan Koenig (Berlin); Flaca (London); Vilma Gold (London); Galerie Sandra Burgel (Berlin); Galerie Alexander Saheb; Noguears Blanchard (Barcelona) and in March 2010 he curated a group show with Manuel Graf at Galerie Kamm (Berlin). In July he will be included in ‘The Long Dark’, curated by Michelle Cotton touring to Kettles Yard, Cambridge. 2009 saw a solo presentation of his work at the Kunsthaus Baselland (Basel) and forthcoming projects include a solo show at Norma Mangione Gallery (Turin). Danke lives and works in Berlin.
www.sorchadallas.com