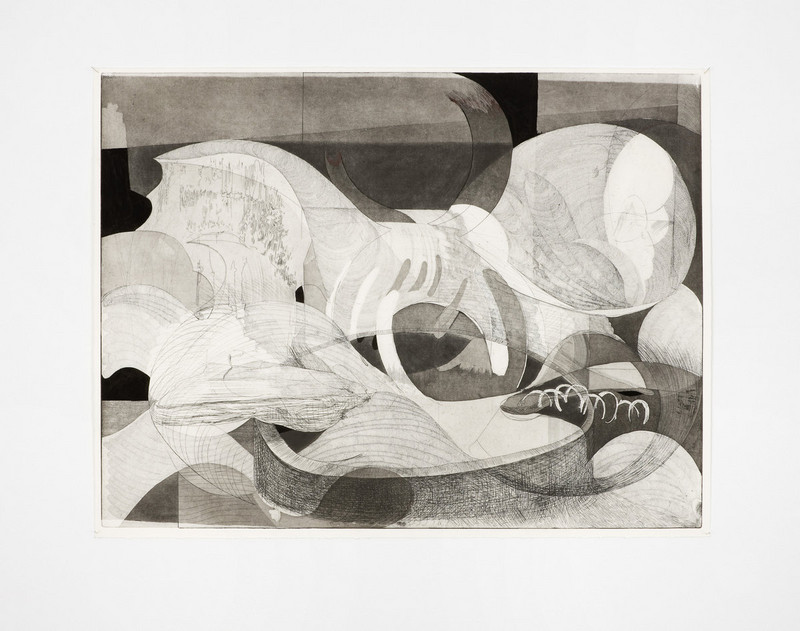 Sorcha Dallas is pleased to announce the second show in the gallery by the Glasgow-based artist Rob Churm. This exhibition brings together new drawings and etchings with Churm’s first wall drawing in situ. The exhibition title, ‘The Exhaustion Hook’, means exactly what the words say, an instance of collapse to an oblique point of fact, a known feeling. Churm explains further, “The hook looks like a lemniscate but it feels like a ball bearing.” It is in the gap between these understandings and their relentless riffing, where Churm’s drawings take shape and its narratives unfold.

Churm’s new etchings consider the antiquated quality of the medium and explore the archaic representation of death, angels and dragons. ‘Fugitive from Conjecture (after Aylett)’, for example, is a large etching of Prame (an alter ego which dates back to the artist’s zine comics The Thirteen Flashbacks of Prame and My Visions) crossing the Styx in a novelty canoe. The long arm of Death clutches a scythe with no blade so that the vast open sky is revealed, tranquil, yet ominous.

The wall drawing in Gallery No 9 is a new work, which will be improvised within the gallery confines. Using the familiar materials of Tipp-Ex, Biro and pen that are found in Churm’s works on paper, this new wall drawing’s composition will be created entirely in situ so that the work contains all the drips and incidental marks that point to the execution of a creative act.

In the past Churm’s drawings often filled the page, layered and extending over the edge. However in this new and ongoing series entitled ‘Wyrd Gels’ the images appear all background, illusory fields reminiscent of Bridget Riley and the repetitive nature of William Morris swatches, but also suggesting coloured filters, or ‘gels’, used in lighting directions.
www.sorchadallas.com