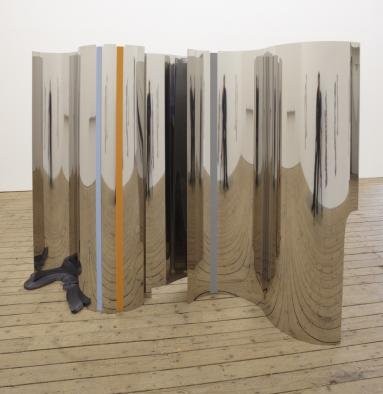 For her South London Gallery exhibition, British artist Alice Channer has created an installation of entirely new works which extend her exploration of the relationship between the human body, personal adornment, materials and sculpture. In these figurative works, Channer questions established hierarchies within the history of art, objects and clothing, and offers a unique perspective on manufacturing, the hand-made and consumer culture.
Out of Body brings together a group of sculptural works which the artist defines as being figurative, but from which recognisable representation of the human form is as noticeable by its absence as by its presence. It is the tension born of that relationship which weaves a binding thread between pieces made in a broad range of materials, using a variety of techniques and on radically differing scales.
Entering the main gallery the viewer is confronted by Cold Metal Body, a radically stretched and distorted digital print of stone-carved classical drapery, suspended from the impressive height of the space and held to the floor by a marble surrogate limb. The bodily references are direct if not immediately obvious in this work, but less so is the distinction between what is human and what is not. Two other pieces, entitled Lungs and Eyes, span the space in a different way, each one occupying opposite walls, 20 metres in length, in a sequence of aluminium frames which take their forms from Yves Saint Laurent’s drawings for his famous ‘Le Smoking’ suits. Establishing a dialogue between the industrially-produced metal armatures and the artist’s body, every frame has been hand-covered in machine-sewn Spandex sleeves, which have been digitally printed with an ink impression of Channer’s arm, stretched beyond recognition.
Adding to this complex web of relationships between various methods of production and references to the human body, floor-based sculptures entitled Amphibians and Reptiles combine machined, hand-carved and polished marble with aluminium casts of stretch-fit Topshop clothing and mirror polished stainless steel which has been digitally cut and industrially rolled along hand-drawn lines.
In talking about the show, Channer says:
“I am not trying to oppose or find alternatives to the things that separate us from ourselves – the machine, the industrial, the virtual, the commercial. Instead, I am seduced by these things and am becoming part of them through the work. The work is me, breathing, feeling and thinking with, through and as part of the processes and materials that make up the industrial and post-industrial late-capitalist world that I live in and that constitute my work.”
Channer graduated from London's Goldsmiths College in 2006, and the Royal College of Art in 2008, and has since shown in numerous group shows as well as at The Approach, London.
The exhibition is accompanied by the publication of the artist’s first monograph.
The exhibition is supported by Vicky Hughes and John Smith, The Henry Moore Foundation and The Elephant Trust. With additional thanks to The Approach.