Pursuit of Perfection: The Politics of Sport 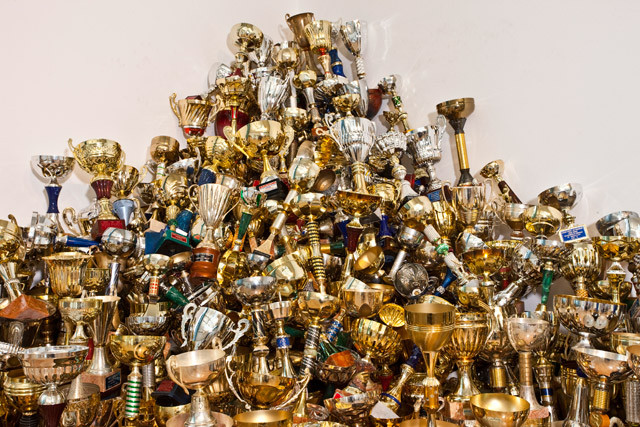 Pursuit of Perfection: The Politics of Sport brings together art works which, in different ways and to varying degrees of seriousness or wit, play on some of the issues raised by sport, the politics surrounding it and its representation in the media. Aleksandra Mir’s spectacular installation Triumph, 2009, comprises 2,529 trophies; a sound piece by Janice Kerbel presents a specially scripted baseball commentary; and works by Roderick Buchanan, Lucy Gunning, Jonathan Monk, Ariel Orozco and Paul Pfeiffer take football as their subject. In Southwark Old Town Hall, John Gerrard’s Exercise (Djibouti) 2012 uses digital technologies to explore aspects of sport, spectacle, military exercise and power. In stark contrast, Michel Auder’s low-tech video collage of clips from TV coverage of the 1984 LA Olympics focuses on the human body, eroticised and mechanised in its pursuit of perfection.

Part of SLG Local which is sponsored by Bloomberg and funded by the National Lottery through the Big Lottery Fund.

The installation of Exercise (Djibouti) 2012 at Southwark Old Town Hall is also supported by The White Wall Company.