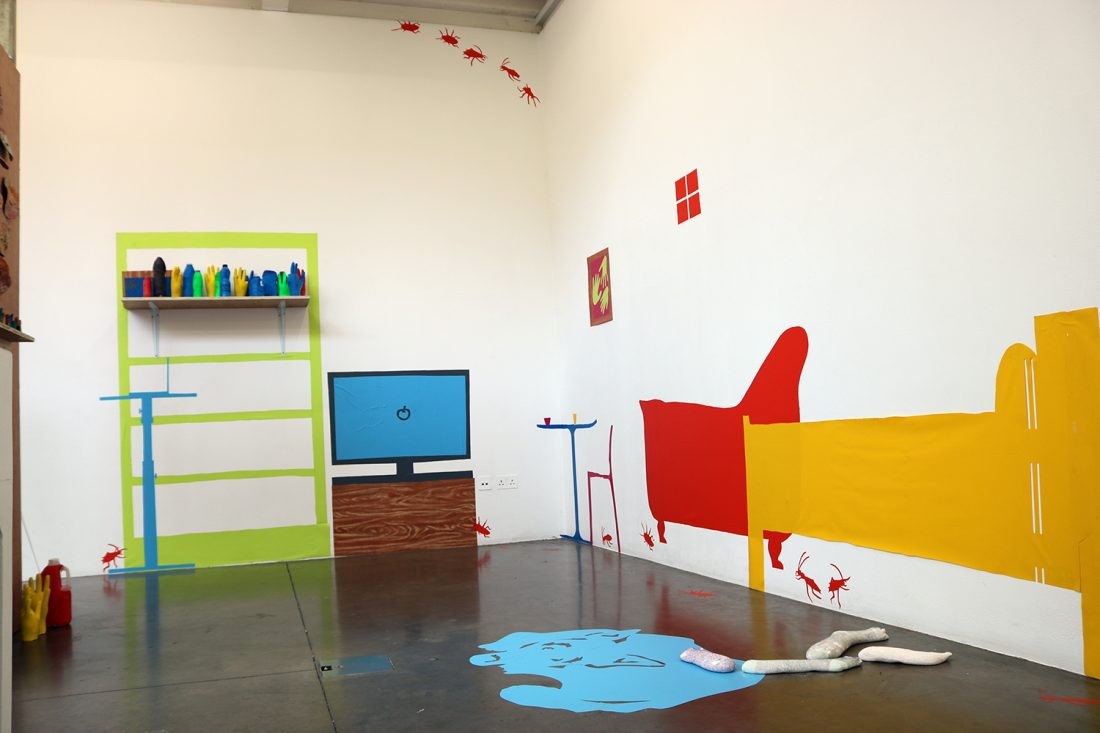 HARRIS GIRLS’ ACADEMY EAST DULWICH AND ARTIST LUCY JOYCE: ART AS AN INTERVENTION
Pupils worked with Lucy Joyce to explore art in unexpected places, a recurring theme in Lucy’s work. Looking together at her work in public places, on building sites or tops of buildings for example, opened up questions about where art could be. The pupils experimented with this possibility for themselves: they made choreographed interventions into the main gallery space during Heman Chong’s exhibition, directing each other’s movements; they drew up proposals for artworks covering their school buildings; they created a performance on Peckham Rye Park, working together as one body. Through all these works, an intuitive response to working together developed, the pupils not only working towards outcomes, but experiencing a performative moment together.

HARRIS ACADEMY AT PECKHAM AND ARTIST HOLLY GRAHAM: ART AS WORDS
Pupils worked with Holly Graham to explore words in art, as text as well as spoken word. The pupils developed tongue-twisters: “Red Blood Blue Blood,” “Honey Bunny Money,” “Cool Hat Cool Cat” to name a few, performing them as a class until the words collapsed into sounds. This relationship to repetition was then played out through printing processes, the repetition of the words recreated in the repetition of prints designed and made by the pupils. Their concertina books on display continue this rolling speech into physical form.

TUKE SCHOOL AND ARTIST HELEN ROUSSEAU: ART AS PROCESS
Pupils worked with Helen Rousseau to explore the potential of objects, both as materials for using and as props for activating. This potential was worked out through an active exploration, a testing and a trying out, both as a group and individually. Objects were tested for their potential for fun, for sensing, for wrapping, for attaching, for jokes, for stretching, for swinging, for throwing, for eating, for lightness or heaviness, for bringing together or pushing away. The artwork on show in this exhibition shows glimpses of these processes, and will be activated by pupils from Tuke School during their visit to the gallery.

EVELYN GRACE ACADEMY AND ARTIST ROSEMARY CRONIN: ART AT THE EDGES
Pupils worked with Rosemary Cronin to explore the edges of what visual arts can be. Working across mediums, they looked at cross-collaborations between fashion, music, popular culture, and art: from Jay-Z performing with artist Marina Abramovic at MOMA, to David Bowie using cut-up techniques to create song lyrics. The pupils developed performances, drawing from their own cultural references, music preferences and fashion styles. Let them introduce you to “dabbing” in the SLG main space during Michael Dean’s exhibition Sic Glyphs.

ARK ALL SAINTS ACADEMY AND ARTIST MARYSA DOWLING: ART AS AN INTERACTION
Pupils worked with Marysa Dowling to create subject portraits and to explore the interaction which develops between photographer and photographed. Using simple props, they transformed themselves into human sculptures, in turn being directed and directing one another. They worked in different contexts, reflecting on how this affected meaning: whether in a playground, the main gallery or a photography studio. These captured moments reflect the photographic relationship developed between the pupils with each other and with Marysa during the project.
www.southlondongallery.org