Are You Sure You Are You? 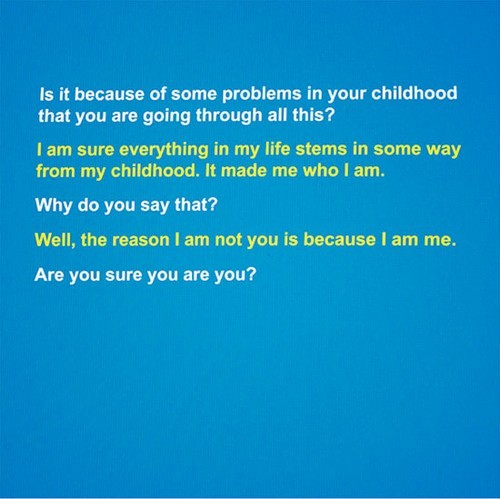 Spencer Brownstone Gallery is pleased to present Are You Sure You Are You?

The novelty of the personal computer and the Internet has morphed into a mundane reality that is haunted by the specters of anxiety, boredom, Internet addiction and identity theft. Turning this postmodern condition on its head, the works in this exhibition possess what could be described as a strategy of web-based aesthetic transcendence. They are proof that the user can overcome the condition of the quotidian not by shying away from her computer (and thus the Internet) but rather by considering it as a provider of aesthetic (higher) experience. Developed initially as a scientific tool, the computer has been damned to the realm of the practical. Yet when it is interpreted as an aesthetic space, one is presented with an almost infinite number of creative possibilities.
The question "Are You Sure You Are You?" is taken from Daniel Everett's artwork, Conversations with a Computer. In the piece, Everett participates in a cyclical conversation with a computer program that is supposed to mirror a Rogerian Therapist. The result is a rambling and disjointed conversation full of nonsensical statements and questions that are often so absurd that they border on Zen koans. This erratic duplicity serves as the exhibition's curatorial point of departure: that it is possible to use the logic and redundancy of a computer (and the Internet) to achieve a dialogue of skepticism and truth is a powerful realization, -even if its occurrence can be interpreted as purely happenstance.
Never before has something so enmeshed with the tedious circumstances of everyday life provided us with so many escapes from it. Nevertheless, fine art has often been viewed as averse to the space of the computer and the Internet. What is more, the art world has been slow in its embrace of computer/internet-based artwork. This is quickly changing as more and more fine artists regard the computer and Internet not as a tool, but as a space for aesthetic production. Many of the artists featured in this exhibition have been at the forefront of this new practice and are instrumental in its inclusion in the discourse of contemporary art.
www.spencerbrownstonegallery.com