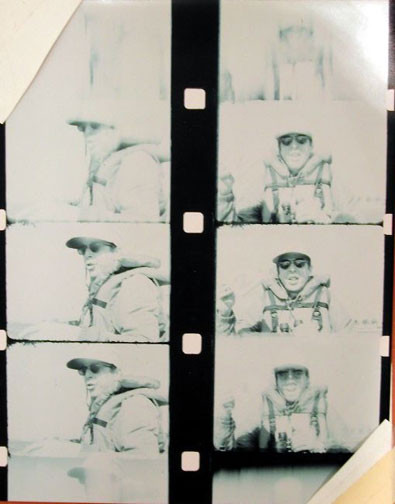 Summer Group Show
'Til I Die

Spencer Brownstone Gallery announces its summer group show ‘Til I Die. Titled after Brian Wilson’s ocean-themed ode to romantic and spiritual exhaustion, the exhibition seeks to explore some of the complex and often fragmentary ways in which the sea persists as motif and metaphor in the work of a range of international artists.

In 1996, Skip Arnold rowed out into the Bermuda Triangle in a reckless extension of performance art’s durational one-upmanship. Having lived to tell the tale, the artist here presents evidence of his trip alongside the meager suitcase of supplies he took with him.

Patricia Bucher has traveled for six weeks on a freighter. Experiencing the strange world of the water first hand, she took note of how quickly the meanings of geography change while at sea. The exhibition will feature several of her drawings of subverted nautical motifs.

Ian Burns will be showing one of his new trompe l'oeil video landscapes that examine the instrumentalization of nature and our ever more passive immersion in the power of the screen. Here, the artist riffs on anxieties of global warming, projecting a tremulous melting iceberg out of throwaway plastic bag.

Artforum magazine described Valerie Hegarty’s recent New York show as “a comparable sculptural flood of barnacles, glass shards, bits of rope, things past identification”. Her oceanic metaphors point up our alienated relationship to the natural world, suggesting the unmentionable depths of the imagination, as much as any geographic space.

Marie Lorenz’s ‘Tide and Current Taxi’ project offers New Yorker’s an alternative commute to work, courtesy of her own handmade small boats. The craft are self-powered and rely on a plotting of the tides and currents around New York harbor. The artist documents her adventures on her blog and, for the show, will present photographs and drawings relating to her trips.

The Miss Rockaway Armada is a group of approximately 25 performers and artists from all over the US. In July 2006 they converged in Minneapolis to construct a flotilla of rafts to journey down the Mississippi River. As they set off again this summer, we will be showing a number of photographs of last year’s adventures.

‘Sail on Sailor’ is an audio installation by Kristin Oppenheim that features her own hushed and halting acapella rendition of the Beach Boys’ last great song. Conjuring a sense of infinite solitude and isolation - whether physical or psychological - the work evinces a traditional notion of the romantic sublime mutated into haunting new forms.

Graham Parker’s ‘Lost In The Telling’ juxtaposes internet-found versions of two great ‘disappearances at sea’: Bas Jan Ader’s legendary 1975 performance “In Search of the Miraculous” (during which the artist disappeared while attempting to cross the Atlantic in a 13ft sailboat); and Titanic designer Thomas Andrews, staring at a painting in the first class smoking lounge, as the ship sinks beneath him in 1912.

Tara Sinn takes the French phrase vont en bateau as a starting point to present an animated ‘trip’ using images that are familiar to us via nostalgia, memory, whimsy, imagination, and the unconscious. Through rhythmic repetition and absurdity, objects such as a toy boat, a throat lozenge, or a glass eyeball will take on new significance as totems or portholes to another world.

Walker and Walker’s work recontextualizes some of the artistic and philosophical mainstays of romanticism within a contemporary idiom. ‘North Star’ locates the position of the North Star in the sky, in relation to the center of the gallery space, and creates a glowing surrogate embedded in the wall.

Following Bas Jan Ader’s lead, the artists in ‘Til I Die make works that, in varying ways, join contemporary media-influenced practice with a genuine sense of the power of the sea, channeling something of Ader’s sophisticated feel for the mutuality of performance and mediation, sincerity and irony.
www.spencerbrownstonegallery.com