An Accumulation Of Information Taken From Here To There 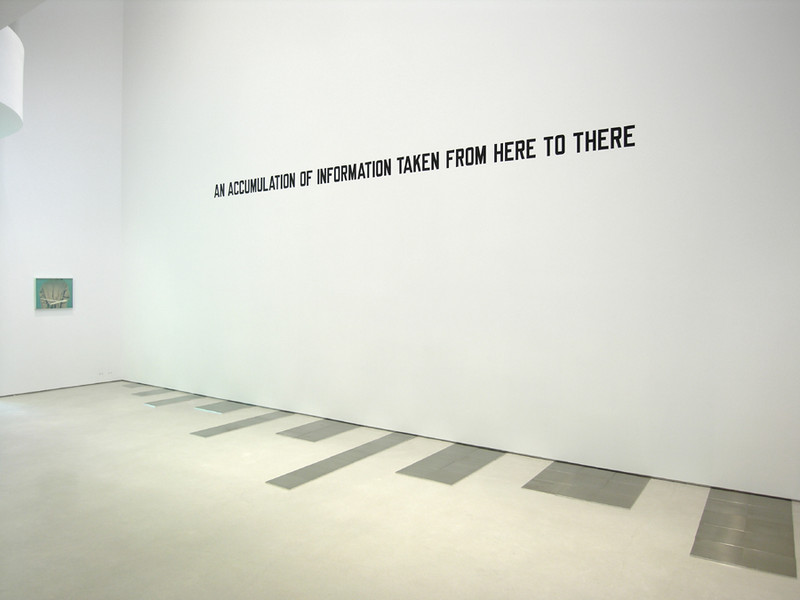 New York, NY: - Sperone Westwater is pleased to present, AN ACCUMULATION OF INFORMATION TAKEN FROM HERE TO THERE, a group exhibition focused on works from the late 1960s to early 1970s. Taking its title from Lawrence Weiner’s 1970 text-based piece, the show highlights a generation of American and European artists who rejected traditional aesthetics in favor of new forms and procedures. Included are key Arte Povera, Minimalist, and Conceptual works that emphasize materials and process, as well as the reconstruction of language. The artists represented were championed by Sperone Westwater early on in their careers and have been prominently featured in the gallery’s forty-year exhibition history.

Alighiero Boetti’s Ononimo (1973) consists of a progression of eleven separate paper panels, each hand-colored in blue ballpoint ink. Boetti's “biro” works were systematically colored by others, yet always based on a code or playful schematic system designed by the artist. In this piece, Boetti addresses the nature of identity and authorship by conflating two similar sounding words with opposite meanings: “anonimo,” which means anonymous, and “omonimo,” which means having the same name. In Senza titolo (1972), Boetti arranges 37 envelopes that were mailed to Gian Enzo Sperone, each with different combinations of colored postage stamps. In Giulio Paolini’s Lo Spazio (1967), pieces of plainly-painted wood are installed on the walls; the surrounding space becomes a part of his work. Mario Merz combines art and nature in Untitled (A Real Sum is a Sum of People) (1971), an installation of eleven gelatin silver prints and neon tubing. This sequence of photographs depicts an ever-increasing number of people sitting in a restaurant, with neon numbers above, following the Fibonacci series – a system of growth, often seen in nature, which perpetuates itself by adding the two previous elements to arrive at the next.

Weiner challenges the definition and nature of the art object in his text work, AN ACCUMULATION OF INFORMATION TAKEN FROM HERE TO THERE (1970), which is installed directly on the wall. Bruce Nauman incorporates linguistic play in his early photograph, Bound to Fail from the portfolio “Eleven Color Photographs” (1967-69), which depicts the artist’s body seen from behind and tightly bound with rope. In Photo Under Water (1971), William Wegman stages a scenario for the camera as he uses an existing self-portrait photograph as his object. This photograph is laid in a shallow developing tray and set in a sink under a running faucet. Wegman appears to be “developing himself”. Bridging art and life, Gilbert & George are the subjects and objects of Photo-Piece (1971), an installation of photographs of themselves in nature interspersed with images of a forest.

Subverting traditional methods of artistic production, Carl Andre’s Minimalist sculpture, Aluminum Cardinals (1972) consists of industrial metal plates placed on the gallery floor in a sequence from 1 to 11. Also included in the exhibition is a 10-part work on paper Names (1964). For this opera, three lines of words from three different US military charts and maps are structured somewhat alphabetically over 50 bars. The resulting lines are meant to be read aloud in unison. On Kawara’s I am still alive (1987) consists of five telegrams addressed to friends with that same message; in a way, the artist is verifying his own existence.

This exhibition also includes a 1965 neon sculpture by Joseph Kosuth; a 1971 stick spiral by Richard Long; a neon and cement sculpture from 1967-69 by Giovanni Anselmo; a 1970 Alternative Piece by Douglas Huebler; a 1959-60 Achrome by Piero Manzoni; and a 1969 photograph by Jan Dibbets.
www.speronewestwater.com