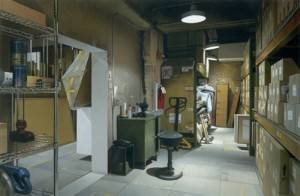 Sperone Westwater is pleased to announce the first one-man show in the United States for Scottish artist Andrew Grassie. ‘PRIVATE,’ an exhibition of new paintings, demonstrates how Grassie, who has for several years made meticulous small-scale paintings of existing artworks, has recently turned his attention to the exhibition space, its history and contents.

To prepare the show, Grassie spent a week photographing the gallery in its entirety, after which he returned home to the UK and painted five miniature renderings of the space and the artworks in it. Painted with exquisite accuracy in egg-tempera on board, the small works are flawless, deceiving the eye and denying their basic painterly conception. The luminous quality of the paintings is reminiscent of 17th-century Dutch interiors, the invisible brushstrokes creating a jewel-like palette of light and color. The self-referential nature of the works—they are paintings of photographs of other works of art—grant these small paintings a seductive and disconcerting pull. In Grassie’s depictions of the gallery’s spaces, offices, storage, and hallways—many of which are private and typically unavailable to public viewing—the scenes are captured from odd angles with the artwork always peripheral in the composition. A Vik Muniz photograph hangs at the end of a hallway, part of a Richard Long photograph is glimpsed through an open door, a Tom Sachs sculpture is barely visible on the side wall of an office. However, Grassie’s tiny paintings are more than an objective record of the space and its contents: their technique and approach confront the basic issues of exhibition, documentation, and the role of photography in the so-called “crisis of representation” in contemporary realist painting.

Grassie’s most recent solo show was in the Art Now space at Tate Britain in 2005. For this exhibition, “New Hang,” he played the roles of both artist and curator and was given full reign of the Tate’s collection to create an imaginary exhibition—he selected works by Leighton, Henry Moore, Turner, Picasso, Newman, and Fontana, among others. The works were then installed closely together in groups, at intervals, and Grassie photographed each overcrowded hang. From these photographs he created 13 paintings which were then installed in the same space, setting up a multi-layered physical relationship between space and viewer. Of course, Grassie’s “New Hang” is fictional, it never took place, and as such, it raises interesting questions about the hypothetical possibilities (and responsibilities) of a museum and its exhibiting spaces. As Mary Horlock noted of “New Hang” in The Financial Times, Grassie’s “art is never a straight quotation, nor is it a critical or ironic appropriation...The formal and conceptual rigour of the project outweighs the modest scale of the work.”

Born in Edinburgh in 1966, Grassie currently lives and works in London. Since attending St. Martin’s and the Royal College of Art, he has had several exhibitions in London and his work has been included in exhibitions at the Whitechapel Gallery, The Courtauld Institute, and The Drawing Center, New York. Grassie has a forthcoming show at Maureen Paley, London later this year. This is the artist’s first exhibition at Sperone Westwater.

There will be an opening reception for the artist on 27 April from 6-8 pm. A catalogue will be published documenting all of the paintings on view and their eventual installation. For more information as well as photographic images, please contact Molly Epstein at Sperone Westwater at (212) 999-7337, or info@speronewestwater.com.
www.speronewestwater.com