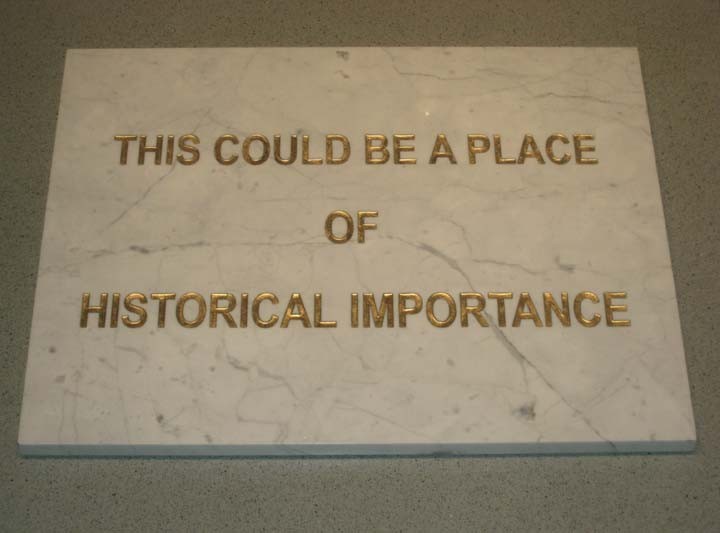 New York, NY: Sperone Westwater is pleased to announce a solo exhibition of historical and recent works by Braco Dimitrijević. The conceptual artist first exhibited at Galleria Sperone in Turin in 1974 and in New York in 1975. On the Bowery this September, he will present a monumental obelisk sculpture, an inscribed marble slab, a group of photographic works and a video piece resulting from his installations with living animals. The exhibition will be on view 6 September through 27 October 2012.

Dimitrijević first gained international attention in 1970s with his "Casual Passerby" series, where photo-portraits of anonymous people were displayed on prominent facades in European and American cities. At the core of Dimitrijević’s philosophy is his idea of "Post History", which he defines in his 1976 book, Tractatus Post Historicus, as the coexistence of differing values and multiple individual truths. In 1976, Dimitrijević initiated his series Triptychos Post Historicus, where original paintings by artists such as Kandinsky, Mondrian, Picasso, Monet and Manet are presented alongside ordinary objects and fruit. Introducing organic matter into a museum setting, the artist juxtaposes the sacred (high art and the museum), and the secular (simple fruits of nature and objects of daily life and work). In so doing, he subverts traditional art historical contexts and values, transforming one's perception of the art work and the language used to describe it.

On the floor of the Moving Room, he will install a white Carrara marble slab engraved with the words "This Could Be a Place of Historical Importance" (1971-2012). Here, the significance of places and objects are called into question as well as conventional hierarchy of values.

In his photographic works, Dimitrijević presents encounters between animals and works of art, creating a world where both exist together in harmony. In Memories of Childhood (1983), a classical sculpture and painting from a private collection in Paris are placed in close proximity to a pair of lions in a den. In Last Witnesses of Another Logic (1983), the artist plays the piano among elephants in a field. "Animals represent the irrational, unknown, unpredictable element because their logic is different from ours and often beyond our comprehension," explains the artist. A green marble obelisk, Post Historic Landmark (1981-2012), measuring 7' 5 1/8" feet, is inscribed with the following text in golden lettering: "If One Looks from the Moon There is no Distance between the Louvre and the Zoo."

Dimitrijević was born in Sarajevo (formerly Yugoslavia) in 1948 and currently lives and works in Paris, France. He graduated from the Zagreb Academy in 1971 and completed his post graduate studies at Saint Martin's School of Art in London in 1973. Solo museum exhibitions have taken place at Städtisches Museum Mönchengladbach (1975); the Stedelijk van Abbemuseum, Eindhoven (1979); ICA, London (1979), Museum Ludwig, Cologne and Kunsthalle Bern (1984); Tate Gallery, London (1985); the Israel Museum, Jerusalem and the Museum Moderner Kunst-Stifung Ludwig, Vienna (1994); Kunsthalle, Dusseldorf (1996); The State Russian Museum, St. Petersburg and Musée d’Orsay, Paris (2005); the Slought Foundation, Philadelphia (2007); Ludwig Museum, Budapest (2008), Musee d’Art Moderne de Saint Etienne (2009), Musee d”Art et d’Histoire Luxemburg (2011). He has participated in Documenta in 1972, 1976, and 1993, the Venice Biennale in 1976, 1982, 1990, 1993, and 2009, the Sydney Biennale in 1978 and 1986, SITE Santa Fe in 1995, the Kwangju Biennial in 1995, the São Paulo Biennale in 1996, and the Moscow Biennale in 2009. His work can be found in approximately 70 public collections, including The Museum of Modern Art, New York; Tate, London; Musee National d’Art Moderne Centre Georges Pompidou, Paris; Museum Ludwig, Cologne; and The Israel Museum, Jerusalem, among others.
www.speronewestwater.com