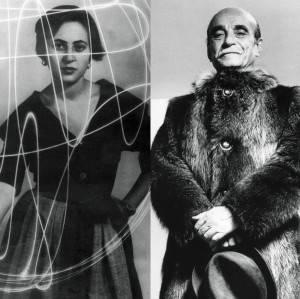 Sperone Westwater is pleased to announce an exhibition of works by Italian artists Carla Accardi and Lucio Fontana. The exhibition will focus on paintings made in the 1950s and 1960s by Accardi and Fontana who both played a vital role in the Post-War avant-garde in Italy and whose groundbreaking exploration of the physicality of materials and the boundaries of space redefined traditional painting and sculpture.

The exhibition includes several of Fontana’s paintings executed in thickly impastoed oil paint including one from his important series La fine di Dio (The End of God). Executed in 1963, this work is believed to be the first painting from the series, which comprises 38 oval canvases of the same size, differing in color and surface, each punctured with holes (“buchi”) in a different fashion. According to Sarah Whitfield, curator of a 2000 survey of Fontana’s work at the Hayward Gallery, London, “Contained within the uniformly egg-shaped canvases, these scarred and demolished surfaces appear extraordinarily calm...By containing the turmoil of cosmic terror within an image of fertility Fontana creates a space where the most distant polarities finally meet and close together.” This first example, titled “Genesi”, is painted in a striking bright pop green, with two large gouges in the center of the painting that cut through the canvas, thereby enabling the viewer to look beyond the physical fact of the painting to what Fontana called “free space.” A major copper piece by the artist from 1965 will also be featured.

According to Germano Celant, “Accardi’s [work] is a painting of unbridled signs, a painting in search of the extreme instance between rational and irrational, between positive and negative...Her labyrinths display a sensual magnetism, cultivating a ferment that tends toward an agglomeration of materials and colors—limitless, structural, and environmental.” Present in her work is a strong tension between painted surface, raw canvas or plastic background, and colored mark. Several of Accardi’s canvases and gouaches, filled with the flatly rendered colored signs that characterize her work, are included in the exhibition, as are several works painted on transparent plastic called “sicofoil”— a series that revolutionized painting in Italy and beyond and had enormous influence on several sculptors from the “arte povera” group, including Luciano Fabro and Mario Merz.

Fontana, whose slash and puncture "spatial concept" canvases made the radical statement that the surface of a canvas could be extended into the surrounding space, has long been lauded as one of the key figures in post-war European art, while Accardi's paintings of brightly colored signs painted on canvas, and later on "sicofoil", were widely known in Italy but were not exhibited extensively elsewhere until more recently. This exhibition follows Sperone Westwater's American debut of the artist's work in January 2005. Accardi, who recently turned 80, was featured in major retrospectives at the ARC Musee d'Art Moderne de la Ville de Paris in 2002, and, most recently, at MACRO in Rome in 2004.

The two artists were friends and admirers of each other's work, and it was at Fontana's urging that Accardi was included in the 1964 Venice Biennale. This exhibition presents an exciting opportunity to examine their work side by side and to celebrate their affinities and innovations in painting and sculpture.

A catalogue with color reproductions and a text by Luca Beatrice accompanies the exhibition. For more information as well as photographic images, please contact Molly Epstein at Sperone Westwater at (212) 999-7337, or info@speronewestwater.com.