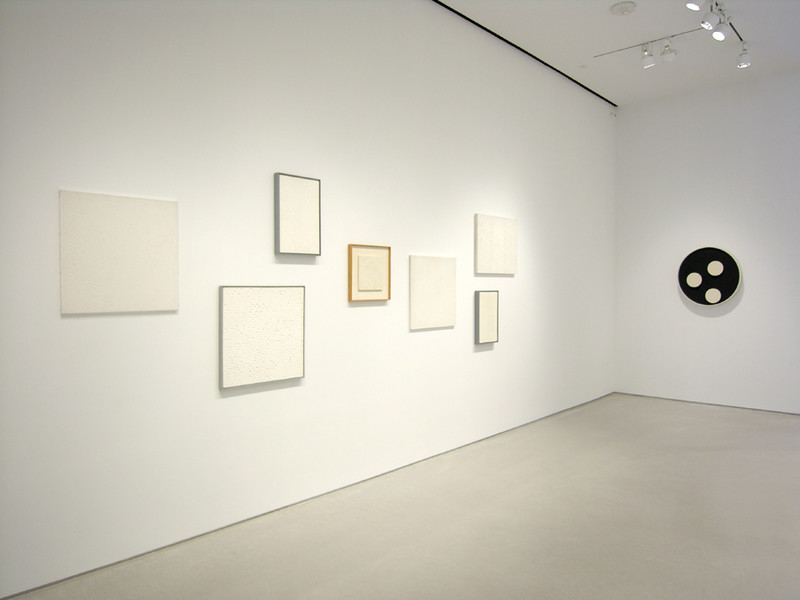 New York, NY: Sperone Westwater is pleased to present Moving Spirits: François Morellet & Gerhard von Graevenitz an exhibition of works by François Morellet (French, born 1926) and Gerhard von Graevenitz (German, 1934 – 1983) in collaboration with The Mayor Gallery in London. The exhibition includes paintings, reliefs, and kinetic works dated from 1960 to 1976 and reunites the two artists who were friends. The exhibition will be on view 21 June through 27 July 2012.

During the 1950s and 1960s Morellet and von Graevenitz worked as part of the Light-Kinetic movement which coincided with the activities of the ZERO Group, Nouveau Realists, and “New Tendencies” artists. The artistic output during this time was concentrated throughout Europe in the hubs of Dusseldorf, Milan, Amsterdam, Paris, Stockholm, Zagreb, and Ulm. The Bauhaus, Piet Mondrian, László Moholy-Nagy, Lucio Fontana, and Piero Manzoni’s Achrome works were points of reference for a younger generation of artists during this time.

In the catalogue essay accompanying Moving Spirits, curator and writer Serge Lemoine notes that the works of Morellet and von Graevenitz are closely connected by "a total abstraction". Both artists utilize a systematic and simplistic language of geometric shapes. The physicality of the work is emphasized by both artists, but the medium varies. Morellet used silkscreen, oil paint, canvas, wood, and neon; and von Graevenitz used plaster and motors for his kinetic works. Despite these differences, as Lemoine states, "the motivation is the same for both artists: to assert a physical truth, sometimes in its most minimal form... to show the method of production... and to disturb the traditional approach to a work."

Gerhard von Graevenitz’s white plaster monochrome reliefs from 1958 to 1960 are composed of identical repeating shapes and minimalistic forms. In a number of works, such as Weisse Struktur, Zufallsverteillung auf vertikaler Fläche IV (1960), the artist deploys a gridded system of small concave and convex half-spherical forms on the surface, resulting in changing patterns of light and shadow. Also on view in Moving Spirits is the artist’s slowly-rotating kinetic works, which he began in 1961; Untitled (1962) is an example. Works from this series consist of mobile geometric shapes that turn from an off-centered axis. Starting in 1965, the artist was creating kinetic works that resembled more complex sequences of movement with white or black stripes on a black or white backgrounds such as Vier exzentrische Streifen, je zwei synchron (1976).

Influenced by artists such as Ellsworth Kelly, Jean Arp, and Jack Youngerman, all active in Paris at the time, François Morellet created his first geometric works in 1950 by applying a system of superimposed patterns of basic shapes and lines. The artist continued this approach with serigraphs of grids in 5 trames 85°, 87°5, 90°, 92°5, 95° (1969). Morellet is most recognized for his “grillages,” consisting of metal grids over painted canvas, which he worked on from 1958 onward, such as 3 double trames, 0°, 10°, 20° (1971). In 2 néons 0-90° avec 2 rythmes interférents (1972), the artist utilized neon on canvas creating a kinetic effect as the light moves across the plane.

Moving Spirits runs concurrently with Ghosts in the Machine at the New Museum (18 July – 7 October), which will include a special installation by François Morellet. Both artists will also be represented in Lumineux! Dynamique! Espace et vision dans l’art d’aujourd’hui à 1913, curated by Serge Lemoine, at the Grand-Palais, Paris in 2013. François Morellet and Gerhard von Graevenitz have a history of shared exhibitions, including New Tendencies at the Gallery of Contemporary Art in Zagreb (1963); Nouvelle Tendance at the Museé des arts décoratifs in Paris (1964); The Responsive Eye at The Museum of Modern Art, New York (1964); Licht und Bewegung at the Kunsthalle Bern (1965); Kunstlightkunst at the Stedelijk van Abbemuseum in Eindhoven (1966); Documenta IV in Kassel (1968); and Pier & Ocean, curated by von Graevenitz for the Hayward Gallery, London and the Kröller-Möller Museum, Otterlo (1980).
www.speronewestwater.com