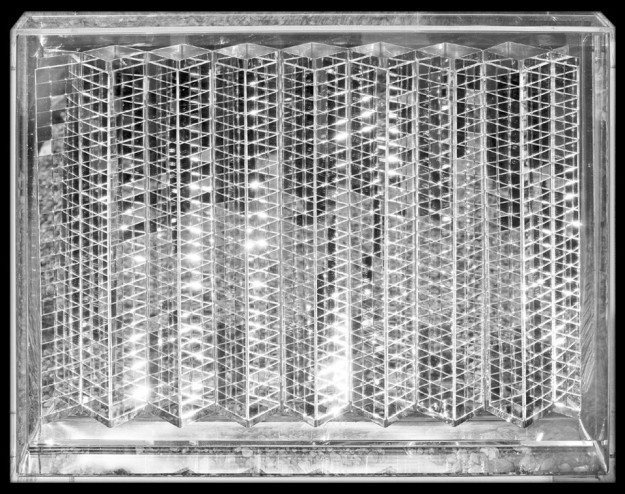 New York, NY - Sperone Westwater is pleased to announce the first survey of Heinz Mack’s early metal reliefs (1957 - 1967). Together with fellow German artist Otto Piene, Mack co-founded the ZERO group in 1957, which sought a renewal in art amidst the ruins of post-war Germany. Created in the formative years of ZERO, Mack’s metal reliefs were made in his first studio in Düsseldorf at 69 Gladbacher Straße, which served as both an experimental laboratory for art and was the site of ZERO’s first exhibitions - “Abendausstellungen”, or “Evening Exhibitions” that lasted the duration of one night.

Mack’s metal reliefs are characterized by their shimmering industrial surfaces, made from aluminum, Plexiglas, wood, glass and stainless steel: all materials that were radically unfamiliar for sculpture at the time. His aim was to abandon the traditional idea of pictorial space and focus instead on an overall surface play of light, reflection and vibration, in the process creating immaterial effects from material form.

In his essay for the brochure which accompanied Mack’s first show in Paris in 1959 at the Galerie Iris Clert, Yves Klein wrote: “the reliefs in aluminum of Mack [...] come from the delicate, discrete and timid love he has always felt for color though always refusing to approach it.”

Heinz Mack has been exhibiting internationally since 1959 and his works can be found in approximately 140 public collections worldwide. Next March, to coincide with the artist’s 80th birthday, there will be a major retrospective in Bonn, Germany at the Bundeskunsthalle.

Heinz Mack was born in Lollar in Hesse, Germany, on 8 March 1931. He studied painting at the Staatliche Kunstakademie in Düsseldorf from 1950 to 1953. In 1956 he received a degree in philosophy at the University of Cologne. Following his studies, Mack applied himself intensively to informal painting, developing by the mid-1950s his first “Dynamic Structures” in painting, drawing and plaster, and metal reliefs. In 1957 he founded the ZERO group with Otto Piene (and later Gunther Uecker), and organized the now-famous evening exhibitions at his studio at 69 Gladbacher Straße. Between 1957 and 1961, Mack and Piene published three editions of the magazine ZERO. Around 1964 Mack stopped making works on canvas, and instead focused on water, light and wind sculptures. In 1966 ZERO's last group exhibition took place in Bonn. During the 1970s and 1980s Mack applied himself overridingly to creating monumental outdoor sculptures. The artist currently lives and works in Mönchengladbach, a city near Düsseldorf, Germany.
www.speronewestwater.com