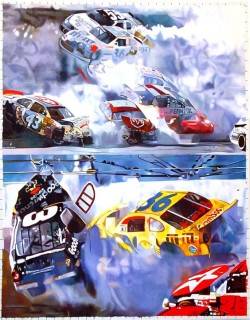 Sperone Westwater is pleased to announce an exhibition of new paintings by Malcolm Morley, the first exhibition of the artist’s work in the U.S. since his retrospective at the Hayward Gallery, London in 2001. This series of works, painted between 2003 and 2005, demonstrates Morley’s continued status as a master of painterly rhetoric while marking a return to his early style of working from found photographic images. These new paintings, however, in contrast to his 1960s paintings of travel posters and vintage postcards, are inspired by current photojournalism—images of catastrophes and the contemporary sports world, such as scenes from football, skiing, NASCAR racing, baseball, a multi-car collision and a collapsed apartment building in Brooklyn.

The real subject of Morley’s paintings, however, is painting itself. Morley, who remains fairly independent from and disinterested in the world of sport, is more engaged in the act of picture making and representation. As the artist stated recently, "It's much more difficult to make an abstract painting that is real than an abstract painting that is abstract." Morley depicts details: each calibrated digital image as a whole is fragmented into a grid of small squares or "cells" as the artist calls them, from which Morley paints one discrete component at a time. His technique, while extremely ordered and focused on the particular, yields surprisingly rich painterly passages -- surprising in the sense that these dynamic images of contact and speed from the worlds of sport and chaos break down into mosaics of small, beautifully incandescent abstract paintings, where foreground and background co-exist on the same plane. Despite Morley’s turn to more current subject matter, this series of new paintings strongly affirms that Morley’s true topic is the art of painting, not the things or events he captures in paint.

Born in London in 1931, Morley studied at the Camberwell School of Arts and Crafts and the Royal College of Art. Since his first exhibition in New York in 1957, Morley has had numerous exhibitions in Europe and North America and has participated in many international exhibitions, including Documenta 5 and 6. Following his first retrospective in 1983 organized by the Whitechapel Art Gallery, Morley was awarded the first Turner prize in 1984. In 1992, he was presented with the Painting Award from the Skowhegan School of Painting and Sculpture. Recent presentations of his work include a survey of his watercolors at the Tate Gallery, Liverpool (1991), a one-man show at the Musée national d'art moderne Centre Georges Pompidou, Paris (1993), an exhibition organized by Fundación "La Caixa," Madrid, which traveled to the Astrup Fearnley Museet for Moderne Kunst, Oslo (1995-96), and a retrospective at The Hayward Gallery, London (2001). In February 2006, Morley’s work will be shown in a survey exhibition curated by Bonnie Clearwater at The Museum of Contemporary Art, North Miami. His work can be found in museum collections worldwide.

A catalogue with full color reproductions, an appreciation by Richard Serra, and an essay by Robert Hobbs accompanies the exhibition. For further information please contact Molly Epstein at Sperone Westwater at 212–999–7337 or by email at info@speronewestwater.com.
www.speronewestwater.com