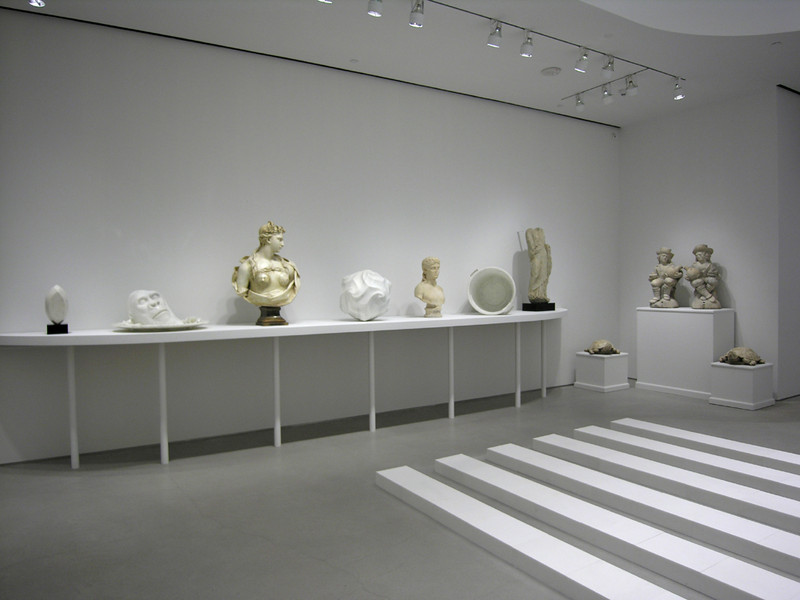 New York, NY: Sperone Westwater is pleased to present an exhibition of white marble sculptures dating from 350 B.C. to the present day. This survey includes Greek and Roman antiquities, Neoclassical sculptures, and works by modern and contemporary European and American artists.

Marble is one of the oldest and most fundamental materials of sculpture with wide-ranging use in the fine arts, decorative arts, and architecture. Among the works from Greek and Roman antiquity in Marble Sculpture from 350 B.C. to Last Week is an Ionian Greek grave relief from the second half of the fourth century B.C. that depicts three figures presenting a narrative on a farewell to the deceased. A Vestal statue from the second century A.D. represents the virgin goddess of hearth, home, and family in Roman religion. Notable Roman sculptures from the first and second century A.D. are also presented including a vase and a bust of young man. Significant sculptures from the fifteenth to nineteenth centuries include Icarus, the mythological figure of a man with wings, by Tommaso Bonazza (Venice 1696 – Padua 1775), as well as Hercules by Giacomo Cassetti Marinali (Venice 1682 – Vicenza 1757), carved out of pietra di Vicenza, to name a couple.

The modern and contemporary works in Marble Sculpture provide a different context for the ancient material. Pioneer of the Dada movement, Jean Arp created Mediterranean Sculpture I (Orphic Dream), 1941, a biomorphic sculpture that has rounded and angular edges, encompassing the artist’s desire to conflate nature’s different forms. Richard Long’s Heaven (Portrait of Carl Andre), 2011, consists of six rows of large marble blocks. Infinite, 2011, by Fabio Viale, depicts two interlocked tires carved out of marble. Not Vital’s 1/2 Man 1/2 Animal, 1996, is an eleven-foot tall anthropomorphic sculpture that resembles a mythical creature. An installation of five slabs, Ai Weiwei’s Marble Doors, 2007, depicts a barricade of white and grey doors. Bertozzi & Casoni’s Gorilbattista, 2011, is a vanitas sculpture of a gorilla head on a plate. Tom Sachs’s Brute, 2009/2010, transforms an ordinary lightweight object to the extraordinary through the medium of marble. In Purity, 2008-2011, Barry X Ball reinvigorates the age-old tradition of figurative marble sculpture through the use of unconventional stones and methods.
www.speronewestwater.com