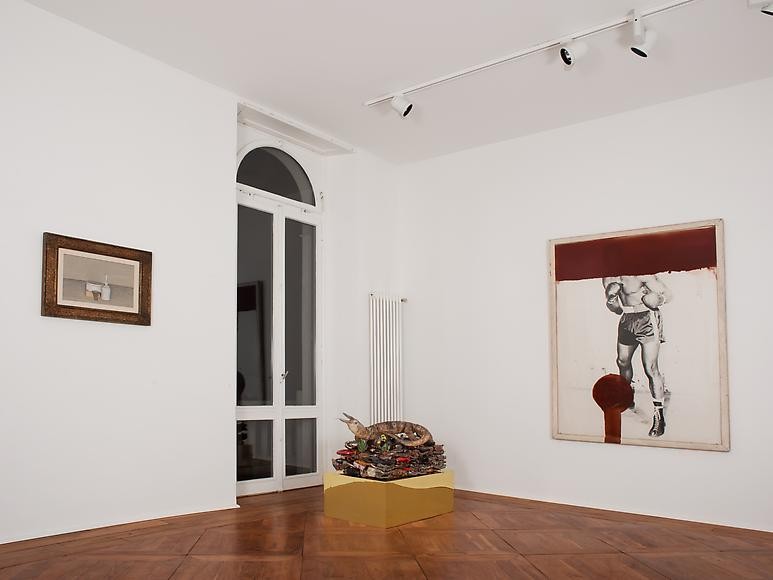 On Wednesday, 22 October, Sperone Westwater opens the exhibition “Modern and Contemporary Masters”. The core of the exhibition is composed of Italian art from the twentieth century, presenting some of the greatest protagonists of that time: Fortunato Depero, Carlo Carrà, Giorgio de Chirico, Achille Funi, Giorgio Morandi, Dadamaino, Carla Accardi, Piero Manzoni, Lucio Fontana, Mario Schifano, Mimmo Rotella. Also on view will be three drawings in ink by German artists George Grosz, a portrait of a woman, “Suzanne”, by Fancis Picabia, a work on paper by Richard Long on which he impressed his fingerprints with clay, “Knives” by Andy Warhol belonging to the series dedicated to knives, a work of oil on photography by Julian Schnabel and a ceramic sculpture by Bertozzi&Casoni.

The ink drawings by George Grosz open the exhibition chronologically. “Butler und Junge”, circa 1915, “Stammtischstudien” from 1919 and “Ku Klux Klan” from 1920, which have strong connotations of caricature, express the fierce social criticism that characterizes the artist’s production and which, with the rise of Nazis in Germany, would bring him the epithet “degenerate artist”.

The "Gladiatori" by Giorgio de Chirico from 1928, belong to a series that the artist elaborated for Paul Guillaume during his time in Paris.The reference to the Italian artistic tradition is evident. Set in a closed box-like perspective, the scene shows the battle between two gladiators while a spectator observes it from a small window. The reclamation of Italian classicism is also evident in the monumental Winged Victory whose hands surround a laurel wreath from 1940 by Achille Funi, a member of the Novecento group. Executed on spolvero paper, the work shows the fresco technique in Funi’s work.

The sketch “Sparks” by Fortunato Depero, was made in 1930, while the artist, a member of Futurism movement, was in New York and was producing covers for popular magazines such as Vanity Fair, Vogue and indeed Sparks.

On display are also two pencil drawings by Carlo Carra including a study for the work "I Romantici", a still life by Giorgio Morandi from 1954, a “Concetto Spaziale” from 1959 by Lucio Fontana, two “Achrome” by Piero Manzoni, a decollage by Mimmo Rotella from 1962, three masterpieces by Carla Accardi including “Fondo verde n° 5” from 1953 which seems to anticipate Cy Twombly, and “Volume” from 1959 by Dadamaino.

The exhibition concludes with a work in polychrome ceramic by Bertozzi & Casoni, “Tempo”, 2013, where a komodo dragon is resting on gold base.
www.speronewestwater.com