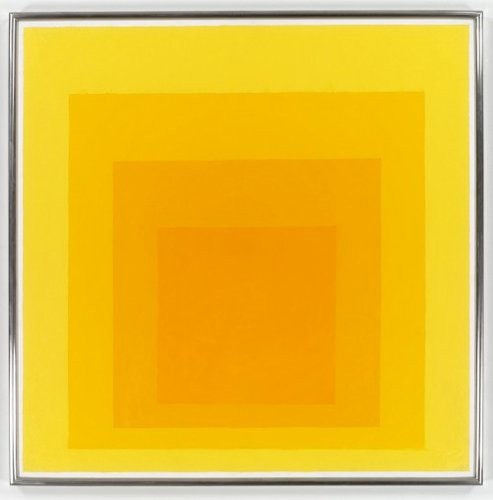 Sperone Westwater is pleased to present an exhibition of works by Josef Albers, Andrew Grassie, On Kawara, Giorgio Morandi and Roman Opalka. Each of these artists has dedicated himself to a lifelong practice of art-making that is both serial and bound within very specific and self-imposed limitations. In the catalogue essay that will accompany this exhibition, Steven Holmes discusses Andrei Tarkovsky's 1986 film "The Sacrifice," in which a monk spends an entire lifetime beginning each day with a walk up the side of a mountain to carry water to a dead tree. At the monk’s death, the tree bursts into life. The moral of the story is not that the water brought the tree to life, but rather it was the faithful day-in, day-out activity of bringing the water. It was not the "content" of the bucket, but the "devotion" of the monk.
What brings these various artists of different generations together is that each maintains a studio practice that can be seen as “sculpting time.” Albers, Grassie, Kawara, Morandi and Opalka have remained committed to exploring a deliberately limited territory, producing complex objects that are remarkable for their repetitiveness and for their subtle variation, and which when considered as a whole, reflect a project that is greater than the sum of its parts.
Throughout his career, Giorgio Morandi concentrated almost exclusively on painting still lifes and landscapes. Working from his studio in Bologna, Morandi painted varying configurations of the same simple elements: flowers, bottles, boxes, vases and bowls. With great sensitivity to tone, color, and compositional balance, he would depict these same shapes again and again, while focusing increasingly on subtle gradations of hue, tone, and arrangement of objects. In this life-long project, it seems Morandi was in search of the perfect composition of light, form, and color.
Josef Albers also favored a very disciplined and restricted work ethic. His most famous series, titled "Homage to the Square," executed between 1950 and 1976, is based on a mathematically determined format of several squares that appear to be overlapping or nested within one another. In the examples presented, Albers superimposes squares of oil paint applied with a palette knife directly from the tube onto a white, primed, Masonite panel. The paint of the squares is applied to all sides of each canvas as thinly and smoothly as possible so as to avoid leaving any traces of personal interaction.
Time, as registered in increments of days, years, centuries, and eons, has also preoccupied On Kawara. In 1966 Kawara began his ongoing series of “date” paintings, altogether titled the "Today" series. The composition of these objects consists of the written date on which the work was executed in simple white lettering painted freehand within a monochrome background. The date is inscribed in the language and according to the calendrical conventions of the country in which Kawara is present when he begins it. Furthermore, every painting in the "Today" series conforms to one of eight predetermined sizes, all horizontal in orientation, ranging from eight by ten inches to sixty-one by eighty-nine inches. Each painting is started and completed in one day. If Kawara is unable to complete the painting on the day it was started he immediately destroys it. Kawara has now created date paintings in more than 112 cities worldwide in a project that will end only with his death.
From 1965 to the present day, Roman Opalka has been painting the sequence of numbers from one to infinity. Starting in the top left-hand corner of the canvas and finishing in the bottom right-hand corner, tiny white numbers are painted in horizontal rows. Each new canvas, which the artist calls a 'detail', takes up counting where the last left off. Each composition is the same size (196 by 135 cm), and each has the same title. Opalka decided he would gradually lighten the grey background of his paintings by adding 1% more white paint in each successive composition. Ultimately, Opalka’s paintings will be completely white-on-white, as he has pledged his life to the execution of this project.
For several years, Andrew Grassie has made meticulous small-scale paintings of artworks and art viewing spaces. The artist first photographs pre-existing artworks and art installations, from which he then paints his compositions. Grassie’s technique and approach confront the basic issues of exhibition, documentation, and the role of photography in the so-called “crisis of representation” in contemporary realist painting. His work is not the image or the subject depicted in the painting, but the process and creation of the painting itself.
www.speronewestwater.com