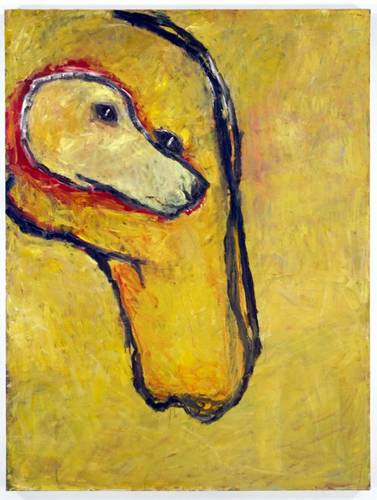 Sperone Westwater is pleased to announce an exhibition of new paintings by Susan Rothenberg.

In these new works on canvas and on paper, Rothenberg continues to draw her imagery from her physical surroundings in the New Mexico desert. Horses, dogs, snakes, rabbits and humans are featured, sometimes whole, often as fragments or parts. The works on view have richly textured surfaces and expand the artist’s palette of bold purples, yellows, and reds. Sixteen years have passed since Rothenberg moved to New Mexico, and these paintings strongly demonstrate that the landscape and world of the desert, once foreign territory for the artist, have become more familiar.

As Robert Storr writes, “the image in a painting by Susan Rothenberg is the last stage of an incremental process of statement, revision, cancellation, and restatement.” The artist herself has said: “I make messy paintings that often have an image in them that you may or may not recognize.” Indeed, Rothenberg’s active gestural brushwork pushes the boundary between figural representation and abstraction and the results are dynamic paintings that simultaneously deny narrative while at the same time referencing scenes of life’s small dramas.

In her canvases, Rothenberg subverts the traditional hierarchies of people and animals— here, paws are nearly as large as arms, and disembodied legs, heads and animal parts make familiar forms appear strange. A motif of masks appears, exemplifying the visceral tension between the lyrical and the grotesque in Rothenberg’s work. Simultaneously intuitive and emotional, these new paintings demonstrate the artist’s extraordinary ability to challenge and extend painterly conventions with her exploration of light, color and movement.

Rothenberg’s first solo exhibition in New York in 1975, consisting of three major horse paintings, was heralded for introducing imagery into minimalist abstraction and bringing a new sensitivity to figuration. Since then, Rothenberg has had numerous solo exhibitions and her work has been exhibited extensively throughout the United States and abroad. Her work is in the collections of over forty major public institutions worldwide. Recent important exhibitions include a retrospective at the Albright-Knox Art Gallery in Buffalo, New York that traveled to Washington, D.C., St. Louis, Chicago, and Seattle (1992); a retrospective at the Museo de Arte Contemporбneo in Monterrey, Mexico (1996); a show of paintings from the nineties at The Museum of Fine Arts, Boston (1999), and an exhibition of drawings and prints at the Museum of Art at Cornell University that traveled to The Contemporary Museum in Honolulu, and the Museum of Fine Arts, Santa Fe (1998-99). Recently, Rothenberg’s work was included in “Contemporary Voices: Works from the UBS Art Collection” (2005) and “Against the Grain: Contemporary Art from the Edward R. Broida Collection,” (2006), both at The Museum of Modern Art, New York, which has significant holdings of Rothenberg’s work on canvas and on paper in its permanent collection.

A catalogue with full-page color reproductions accompanies the exhibition. For more information as well as photographic images, please contact Molly Epstein at Sperone Westwater at (212) 999-7337, or info@speronewestwater.com.