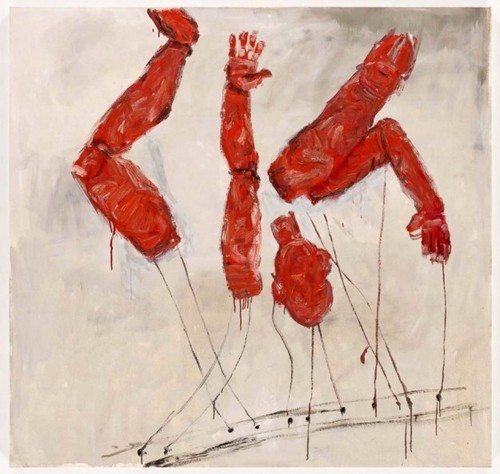 Sperone Westwater is pleased to announce an exhibition of ten new paintings by Susan Rothenberg.
In these new works on canvas, Rothenberg has created compositions with fragmented images of the body. Acting as surrogates for the human form, Rothenberg uses these disembodied puppet legs, heads and arms to demonstrate how the representation of the figure can be transformed into a study of space and form. Unlike other recent paintings in which much of the imagery was drawn from Rothenberg’s physical surroundings in the New Mexico desert, this new group of work uses the body as its primary subject. This series is the latest example of Rothenberg’s longtime ability to challenge and extend painterly conventions in her distinctive way of organizing pictorial space and her exploration of light, color, form and movement.
In these paintings, boldly colored shapes are juxtaposed against a textured and heavily worked white/grey/putty background – a technique that can be traced back to Rothenberg’s radical Horse Paintings of the 1970s. Although the shapes of body parts represented in these new paintings are familiar, all sense of narrative is lost by their dispersion across the picture plane and the composition as a whole becomes abstract.
Rothenberg’s first solo exhibition in New York in 1975, consisting of three large-scale painting of horses, was heralded for introducing imagery into minimalist abstraction and bringing a new sensitivity to figuration. Peter Schjeldahl called the show “a eureka,” stating that “the large format of the pictures was a gesture of ambition” and that “the mere reference to something really existing was astonishing.” Since then, Rothenberg has had numerous solo exhibitions and her work has been exhibited extensively throughout the United States and abroad. Her work is in the collections of over forty major public institutions worldwide. Recent important exhibitions include a retrospective at the Albright-Knox Art Gallery in Buffalo, New York that traveled to Washington, D.C., St. Louis, Chicago, and Seattle (1992); a retrospective at the Museo de Arte Contemporáneo in Monterrey, Mexico (1996); a show of paintings from the nineties at The Museum of Fine Arts, Boston (1999), and an exhibition of drawings and prints at the Museum of Art at Cornell University that traveled to The Contemporary Museum in Honolulu, and the Museum of Fine Arts, Santa Fe (1998-99). Forthcoming important exhibitions for Rothenberg include a group show titled “Paint Made Flesh” at the Frist Art Center in Nashville, Tennessee from 23 January – 10 May 2009, and a solo survey of twenty-five paintings presented by the Modern Art Museum of Fort Worth and the Georgia O’Keeffe Museum in Santa Fe, New Mexico. “Susan Rothenberg: Moving in Place” will open at the Modern Art Museum of Fort Worth (15 October 2009 – 4 January 2010), and travel to the Georgia O’Keeffe Museum in Santa Fe, New Mexico (22 January – 16 May 2010), The Phillips Collection in Washington D.C. (15 June – 30 September 2010), and the Miami Art Museum (15 October 2010 – 9 January 2011).
A catalogue with full-page color reproductions accompanies the exhibition. For more information as well as photographic images, please contact Maryse Brand at Sperone Westwater at (212) 999-7337, or maryse@speronewestwater.com.
www.speronewestwater.com