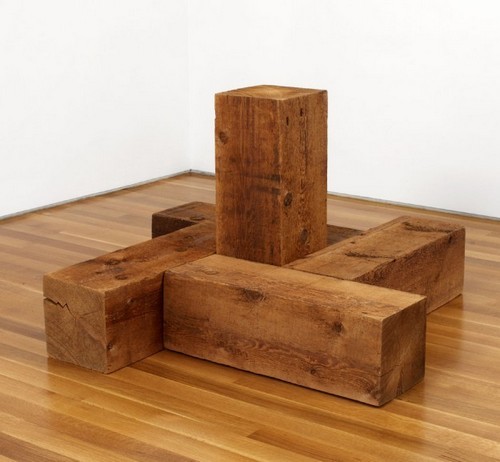 zig zag: A line or course that proceeds by sharp turns in alternating directions.

Sperone Westwater announces Zig Zag, a group exhibition of works created between the late 1960s and early 1970s. Taking its title from a 1966 sculpture by Alighiero e Boetti, the show spotlights the activities of a generation of American and European artists whose work reflects a similar rejection of traditional aesthetics in favor of new forms and procedures. The show will include a number of key Arte Povera, Post-Minimalist and Conceptual works, many of which have not been on public view in New York for more than 30 years. All of the artists presented in Zig Zag feature prominently in the exhibition history of Sperone Westwater, where they were championed from their early days. On the eve of the gallery’s thirty-fifth anniversary, this exhibition celebrates the radical influence these artists have had on the evolution of contemporary art.

In 1966 Alighiero Boetti began making sculptures with materials that referenced everyday objects. One such work, Zig Zag (1966) is composed of printed multi-colored fabric stretched over a metal armature, somewhat reminiscent of a folding lawn chair confined within a cubic framework. Zig Zag is one of the first examples in which Boetti uses fabric in his work – the beginning of what would become an in-depth exploration of concepts using textiles that lead to the later embroideries and Mappa following his travels in Afghanistan and Pakistan.

Also on view is Boetti’s Dossier Postale, initiated in 1969 when Boetti first started to utilize the postal system in his work. For Dossier Postale (1969 – 1970), Boetti chose around 20 recipients – primarily artists, art critics, dealers, and collectors active at the time. Boetti sent an express mail envelope to each person at every stop along his/her imagined itinerary. Each letter was returned to the artist undelivered, then placed within a new larger envelope and sent to the next address. With each mailing, the outer envelope would grow larger, and its contents would grow thicker. The addressee would never see any of the envelopes, which would ultimately remain with the artist.

Mario Merz is represented by two large-scale sculptures from 1968: Lingotto and Senza Titolo. Incorporating natural materials such as beeswax and tree branches, both works are important early examples of Merz’s life-long dedication to using humble materials from everyday life. After 1968, Merz became a principle of the Arte Povera group of Italian artists collectively bound by a shared anti-elitist aesthetic and the incorporation of accessible materials, debris from both the natural and inorganic worlds.

Bruce Nauman’s sculpture Untitled (1968) is a work comprising a lead plate with a small hole in the center atop a steel plate. The hole is filled with water, causing the steel portion of the piece to rust from the inside.

The exhibition will also include a group of black-and-white photographs by William Wegman from the early 1970s. In these works, the artist uses himself as the subject and directs the viewer to a scene staged exclusively for the camera. Interested in ideas of perception and identity, Wegman juxtaposes two subtly different photographs and uses wordplay to make these conceptual works both humorous and strange.

Douglas Huebler’s work also incorporates an element of chance and humor. Alternative Piece #1 (1970) documents a journey that the artist took between Konrad Fischer gallery in Dusseldorf, Germany and Galleria Sperone in Torino, Italy. For this journey, the direction traveled by artist between both cities was determined by the flip of a coin. The work itself is the compilation of the trip’s documentation: polaroids, maps, names, time, directions taken and distances travelled.

Furthermore, Zig Zag will include a 1972 sicofoil painting by Carla Accardi, a 1969 copper metal floor sculpture and 1975 cedar work by Carl Andre, a 1970 neon and cement sculpture by Giovanni Anselmo, a 1969 striped cotton work by Daniel Buren, a 1974 photograph by Jan Dibbets, a 1965 neon sculpture by Joseph Kosuth, a 1971 spiral stick sculpture by Richard Long, a 1962 painting by Mario Schifano and a 1967 cloth piece by Richard Tuttle.
www.speronewestwater.com