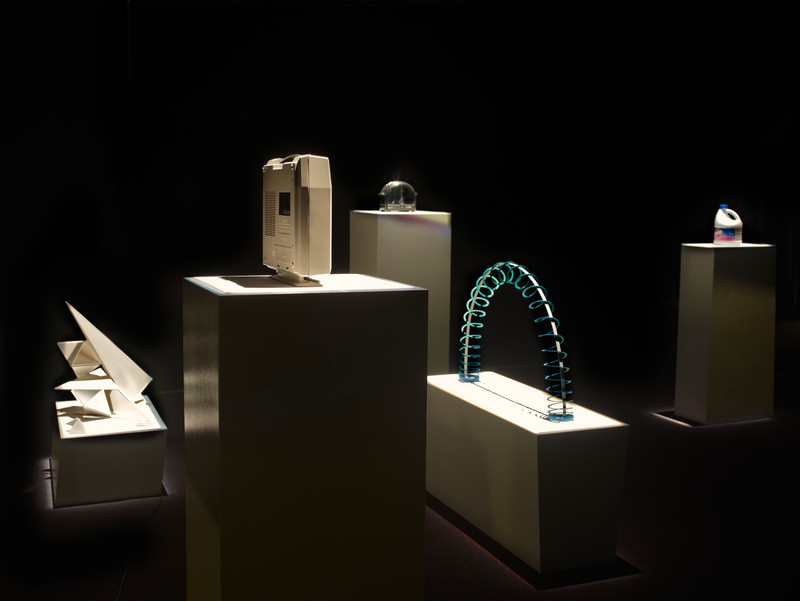 Over the last two decades, contemporary art has seen a remarkable shift towards the performative.
This change in emphasis from art-object to process is expressed in the current revival of performance art, site-specific and time-based projects, and process-driven painting practices. Nevertheless, the boundaries between the spheres of visual art, theater, literature, and film have remained remarkably
intact.
French-born, UK-raised and New York-based artist Alexandre Singh’s practice blurs these boundaries
in ways that are as surprising as they are rigorous. His idiosyncratic, playfully investigative spirit is
manifest throughout his works: in the Assembly Instructions (2008-12), conceptual collages that take
the form of surreal flow-charts; in The Marque of the Third Stripe (2007), a gothic novella about the
founder of Adidas; and in The Humans (2013/14), a three-hour theatrical play reimagining the creation
of the world. In Singh’s universe, the floorplan of an IKEA building serves as a map of all human
knowledge, and the lowest part of the lowest animal, a donkey’s rectum, is the secret dwelling place of
the divine creator.
Here Singh presents his installation, The School for Objects Criticized, earlier versions of which were
exhibited at the New Museum, New York, and Palais de Tokyo, Paris. At first, it appears to be an
elegant, theatrically-lit readymade installation in which seemingly banal objects – a bottle of bleach, a
toaster, two cassette recorders, a derivative abstract sculpture, a stuffed skunk, and a slinky toy – are
presented on pedestals as important historic sculptures are in museums. But the installation soon
reveals itself to be an elaborate, dramatic set-up.
With astonishment, viewers come to realize that not only can these inanimate objects speak, they also
have dramatic, finely-contoured characters, and fascinating relationships to one another. They
effusively discuss art and criticism, creative processes and mass production, God and life, sex and
death; yet they always come back to an art installation they recently saw, a work by an artist named
Alexandre Singh. Although the objects note the installation’s similarity to their own constellation, it
never occurs to them that they are actually talking about themselves.
Whenever a 'character' enters the scene, a spotlight illuminates the pedestal on which that object
rests. The theatrical effect is compounded by elaborate sound effects and dynamic lighting, which
adds momentum to this object tableau, making it appear alive. Little by little, you come to realize the
technical sophistication behind this seemingly simple installation, and how much of its highly complex
technology remains hidden (much like the centuries-long tradition of stage magic).
It is no coincidence that the work’s title references Molière’s one-act comedy La Critique de l'École
des Femmes (1663), in which the French dramatist brings to the stage the theater critics who had
attacked his piece, L'Ecole des Femmes (1662), and roundly refutes them. Yet we find other theater
references as well. The profusion of dialogue, as well as the characters’ tendency to speak in
paradoxes and express themselves with witticisms, recall plays by Oscar Wilde and Noel Coward. Its
setting in the art-loving city of New York is reminiscent of films by Woody Allen; and the penchant for
one-liners and sexually colored jokes evokes the tradition of American sitcoms like Seinfeld. In some
ways, The School for Objects Criticized can best be described as a contemporary comedy of
manners, with the art world and its conventions as its lynchpin. With finely-honed powers of
observation, Singh analyzes the art scene’s anti-intellectual and neo-Marxist currents, as well as its
ambivalent power structures, bourgeois sense of complacency, and sometimes vacuous ambitions.
Singh’s practice seems to elude art historical classification: The jocular quality of many of his works
only sometimes recalls the tradition of conceptual provocation found in the work of John Baldessari or
Peter Fischli David Weiss; and his affirmation of the theatrical only occasionally brings to mind
Christoph Schlingensief. Perhaps Singh's attitude towards his work is best compared to that of Piero
Manzoni and Yves Klein, who very theatrically staged themselves as 'artist characters', and
repeatedly subverted the seriousness of their artistic propositions through irony.
The thread connecting Alexandre Singh’s disparate works is his unique inquiry into the value of
narrative. Singh combines masterful craftsmanship in a variety of media with a single conceptual and
narrative structure, one that relies on brilliant associative leaps and dazzling detours that might at first
seem absurd, yet turn out to make surprising sense. Whether his influences are drawn from literature,
theater, philosophy, science, or history, the structure of his work is built upon narratives and ideas that
– in very unexpected ways – open art to systems of knowledge and experience otherwise alien to the
field.
Alexandre Singh (*1980, Bordeaux, France) lives and works in New York and Paris. Solo exhibitions
include The Humans at Sprüth Magers, London (2014), The Pledge at Drawing Center, New York (2013), The School for Objects Criticized at Palais de Tokyo, Paris (2011), The Marque of the Third Stripe at White Room, White Columns, New York (2009) and UNCLEHEAD (with Rita Sobral Campos) at Museu da Electricidade, Lisbon (2008). Major group exhibitions include The Bottom Line at S.M.A.K., Gent (2015), The 12th Biennale de Lyon, France (2013/2014), 100 Years at Garage Center for Contemporary Culture, Moscow (2012), BUAG, Boston (2012), and MoMA PS1, New York (2009), Wide Open School at The Hayward Gallery, London (2012), Free at the New Museum, New York, and The Logic of Association at MoMA PS1, New York (both 2010). The theatre play The Humans was performed at Festival d'Avignon, Avignon (2014) as well as at Performa 13, New York and De Keuze Festival, Rotterdam (both 2013).
An audio version of The School for Objects Criticized is podcasted online in English and French.
https://soundcloud.com/spruethmagers
The Berlin gallery is concurrently presenting solo exhibitions by Thea Djordjadze and Craig Kauffman.
www.spruethmagers.com