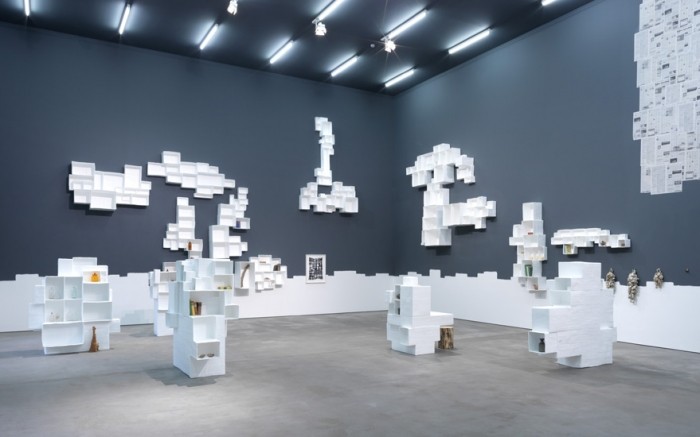 Sprüth Magers Berlin is delighted to present ’Pattern of Habit’, an exhibition of new work by Andrea Zittel.

’For the last twenty years my work in one way or another has examined how psychological structures, thought systems and beliefs are manifested as physical objects in the world that we create around ourselves. Most recently this research has focused on the patterns and systems that are bound to habits, schedules and rules. For instance, I live in the desert where there all of my day to day necessities are ordered on-line, and delivered to my doorstep - a never ending stream of products, each carefully packed in its own cardboard box. After I unpack its contents I eye the box thinking that it is a shame to throw out such a perfect vehicle – especially if it has special proportions or clearly crisp edges and corners. Soon I found myself stacking the boxes up along an empty wall, eventually devising a way to cement this irregular structure together into an integrated unit that reflects a pattern of my own life through consumption.

The shape and pattern of the work titled ’Aggregated Stacks’ is that of a fractured grid. I find that we as humans aspire toward the orderly and systematic, however life itself is quite chaotic. The ultimate reality of these two forces is reflected in the dynamic of this imperfect system where patterns and shapes and rhythms fall in and out of order, or flex to accommodate one another.

Another example of this fragmented patterning is the way that we order and compartmentalize our time. Schedules are made by turning spendable units of time into measurable shapes stacked into a grid of months, weeks, days, hours –ultimately not so different from the way that we organize boxes of cereal on a supermarket shelf. When I observe the patterns of my daily routine I notice there are blocks of time when I’m not really in my immediate reality at all. For instance, I live in the desert – but for about five hours a day my entire focus is on projects and communications in an entirely different reality. ’Pattern of Habit’ is a work that charts Internet usage over the course of 39 days. The blocks of time that are spent writing emails have been turned into room-like shapes that reflect how focus can not only be related to duration, but also to location.

Information in the media is likewise packaged into consumable blocks of content, which like time, can be turned into a loose grid of interchangeable components. While we ’spend’ time, we ’consume’ content. But similar to a schedule, the content of the cells in a newspaper is always replaceable – ultimately the format creates a regularity that supersedes the chaos of the natural disasters, life dramas or and ever changing world events that are represented within its format. ’Tellus Interdum’ is an issue of the local newspaper, printed in Yucca Valley near my house in Joshua Tree, California, in which all of the content has been replace by Lorem Ipsum. Lorem Ipsum is a placeholder text used by graphic designers – It is generated using Latin phrases with words that have been altered, added or removed, in order to make it nonsensical in meaning, but allow the structure to supersede it.

The one final work that connects all of the other investigations in this exhibition is the work titled ’single strand forward motion’ - this project precedes and perhaps foreshadows the other works. It is generated using crochet as an incremental, modular, building technology that could be ordered according to different thought systems or rule sets. For instance if one makes a rule to crochet in a forward motion it creates a different pattern than if one is allowed to go forward and backward. Each shape begins with a set of ’permissions’, however there is never a set plan for what the finished work will look like. All decisions are made in the moment, as long as they qualify within the prescribed set of allowed actions. Finally a finished work emerges – each pattern is entirely unique – yet there is always a particular formal pattern which characterizes the prescribed set of permissions. It is these prescribed permissions, thought systems and rule-sets that dictate the shape of the world around us. Making this work has increased my sensitivity to the ordered world and allowed me to look behind the order in search of the underlying rational or belief that may have created it.

Andrea Zittel, born 1965 in Escondido, USA, lives and works in Los Angeles and Joshua Tree, USA. Her work has been exhibited internationally, recent solo shows include ’Costume Gallery’, at Palazzo Pitti, Florence, ’A-Z Habitable Island’, Indianapolis Museum of Art, Indianapolis, USA, the retrospective ’Andrea Zittel’ at the Schaulager Basel in 2008, and ’Small Liberties’ at the Whitney Museum of American Art, New York, in 2006.