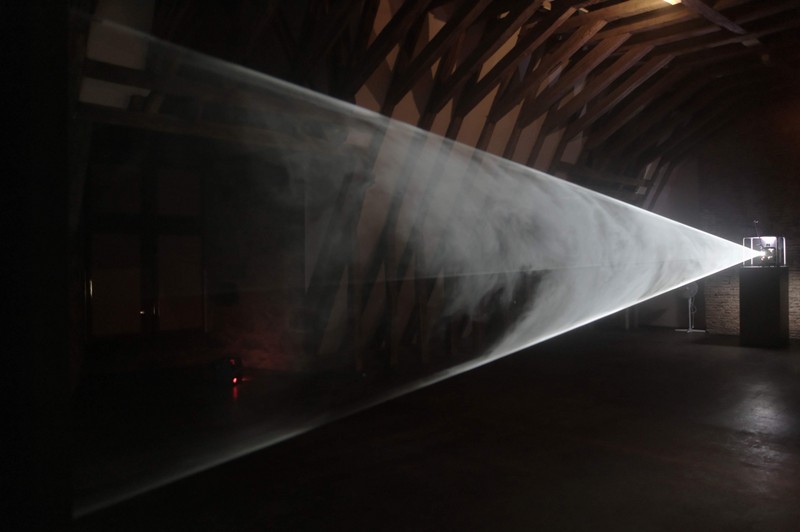 Anthony McCall
'Line Describing a Cone' (1973), installation view, Musée de
Rochechouart, 2007.
Photo: Freddy Le Saux
Courtesy Sprüth Magers Berlin London
ANTHONY MCCALL
1970s Solid-Light Works
22/11/2013 – 25/01/2014
Internationally recognized for groundbreaking work that occupies a space between sculpture,
cinema and drawing, Anthony McCall’s practice has influenced a generation of artists working with
film and installation. The exhibition at Sprüth Magers Berlin offers an unprecedented occasion to
see three of the artist’s seminal ‘solid-light’ works that were produced in the early 1970s in New
York, including Four Projected Movements (1975).
The main gallery space will be divided into three areas, all immersed in darkness. At the centre of
the exhibition will be Line Describing a Cone (1973), the first in the artist’s series of ‘solid-light’ films,
in which a volumetric form composed of projected light slowly materializes in three-dimensional
space. In 2003, in a lecture published in October, McCall wrote how “the experience of Line
Describing a Cone, and the pieces that followed, depends equally on their relationship to both
sculpture and film”. Scale and the body, and moving around a three-dimensional object in a gallery
space are sculptural concerns, yet the work is exhibited in a darkened room, generating a cinemalike
atmosphere. This combination of darkened space and projected light creates a unique type of
engagement, as viewers negotiate not only the darkness and the projection, but also one another.
Shortly after Line Describing a Cone, McCall worked on a series of short films that created an
illusion of movement using drawing as an image source. Conical Solid (1974), a ten-minute film on
display in the first room, sets up a flat blade of light rotating from a fixed central axis. McCall made
the work using simple animation techniques, starting with a line drawing created with a ruling pen
and white gouache on black paper. The artist then placed the line drawing under the camera, and
filmed it one frame at a time, each time moving the line a fraction to the next position, creating the
illusion of motion.
While Line Describing a Cone and Conical Solid both show continuously using loopers, the seminal
work Four Projected Movements (1975) will be projected live using a single projector and a
projectionist. Originally shown in New York and London in 1975, the work is on view in mainland
Europe for the first time. Four different spatial movements are created by the same fifteen-minute
reel of film passed through the projector in each of the four possible ways; forwards, backwards,
forwards back to front and backwards back to front. The projector is the agent of change, controlled
by a living projectionist, a physical element integral to the work, making it an early example of ‘longduration
performance’ and installation art. The film directly addresses the architectural space itself,
with the projector positioned on the floor in the corner of the room so that the adjacent wall and floor
establish the boundaries of the space through which the blades of light travel.
In Line Describing a Cone, Conical Solid and Four Projected Movements, McCall deconstructs
cinema by reducing the medium of film to its most basic elements of duration and light. At the same
time, the idea of cinema is expanded to incorporate the idea of sculpture, in which threedimensional
space is shared by volumetric planes of light and a mobile and active observer. With
forms that develop according to a precise durational structure, with their portable projectors, the
absence of cinema seating, and a set of concerns that rejected theatrical narrative, these three early
works are not only key examples of ‘Expanded Cinema’ but they also helped to lay the foundations
of installation art.
On display in the viewing room will be a selection of works on paper relating to the three
installations. In addition, a number of the artist’s original notebooks from the 1970s will be on view,
providing an insight into the planning and production of the works in the exhibition.
Sprüth Magers is pleased to announce Anthony McCall: 1970s Works on Paper, a new publication
by Walther König, featuring a comprehensive collection of drawings from the period.
Anthony McCall lives and works in New York. Solo exhibitions include Centre Pompidou,
Paris (2004), Institut d’Art Contemporain, Villeurbanne, France (2006), Musée de Rochechouart,
France (2007), Serpentine Gallery, London (2007-8), Hangar Bicocca, Milan (2009), Moderna
Museet, Stockholm (2009), Ambika P3, London (2011), Hamburger Bahnhof, Berlin (2012), and
Kunstmuseum St Gallen (2013). Group exhibitions include Into the Light: the Projected Image in
American Art 1964-77 at the Whitney Museum of American Art (2001-2), The Expanded Screen:
Actions and Installations of the Sixties and Seventies at Museum Moderner Kunst, Vienna (2003-4),
The Expanded Eye at the Kunsthaus Zürich (2006), Beyond Cinema: the Art of Projection at the
Hamburger Bahnhof, Berlin (2006-7), The Cinema Effect: Illusion, Reality and the Projected Image
at the Hirshhorn Museum, Washington DC (2008), On Line: Drawing Through the Twentieth
Century at the Museum of Modern Art, New York (2010-11), Off the Wall at Museu de Arte
Contemporânea de Serralves, Porto (2011), Light Show at the Hayward Gallery, London (2013) and
Ends of the Earth: Land Art to 1974 at LA MoCA and Haus der Kunst, Munich.
At the same time, Sprüth Magers Berlin is presenting the solo exhibition 100 x Walchensee by Axel
Kasseböhmer.
www.spruethmagers.com