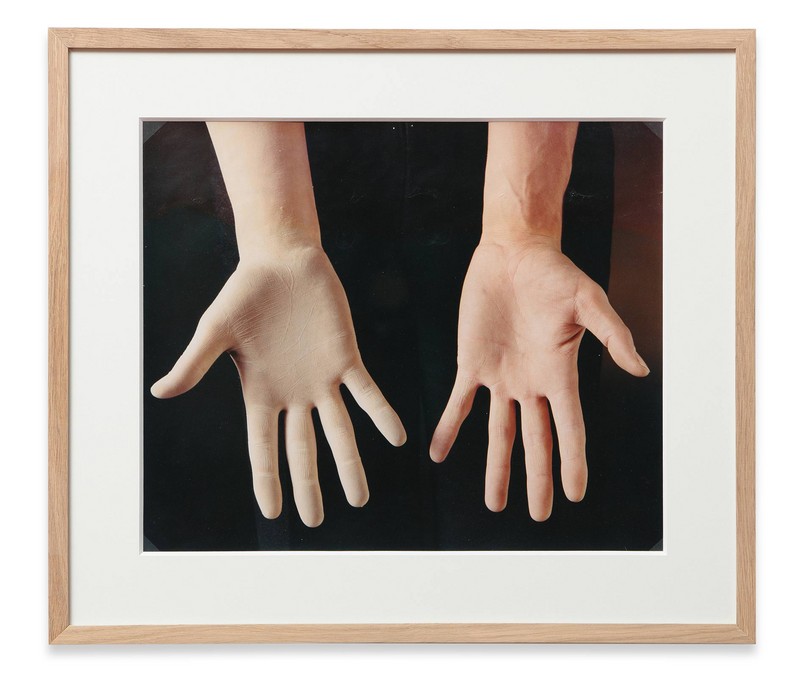 Giuseppe Penone
Guanto, 1972
Colour photograph
34 x 41 cm
13 3/8 x 16 1/8 inches
Edition of 50
Edizioni Multipli – Torino
© Giuseppe Penone
Courtesy Sprüth Magers
Arte Povera and 'Multipli', Torino 1970-1975
Curated by Elena Re
18/09/2014 - 08/11/2014
In 1970 Giorgio Persano opened 'Multipli', his first gallery in Torino. 'Multipli' was exceptional for its
time. Working with Arte Povera artists and with other Italian artists linked to the conceptual art of the
era, 'Multipli' produced a significant body of multiples from 1970 to 1975. Persano and his artists did
not view the multiple merely as a means to circulate or multiply the image through the reproduction
of an original. The gallery was founded, rather, on the notion that a work of art could be democratic.
Although each piece was made as part of a series, each object would also retain the characteristics
and aura of a unique piece. Curated by Elena Re, Sprüth Magers Berlin presents an exhibition that
focuses in particular on artists associated with Arte Povera, exploring the idea of the multiple as the
driving force behind a new form of artistic production.
The artists who made and exhibited work at 'Multipli' were Giovanni Anselmo, Alighiero Boetti, Pier
Paolo Calzolari, Giulio Paolini, Giuseppe Penone, Michelangelo Pistoletto and Gilberto Zorio, as
well as Marco Gastini, Giorgio Griffa, Claudio Parmiggiani and Salvo. The artists did not develop a
collective or specific medium for their works, but helped to transform the multiple into a historically
important genre by developing a range of different techniques. Anselmo, for instance, worked with
soil, Zorio incised cowhides, Salvo created marble plaques, Calzolari made installations with felt,
golden thread and a rose, Penone used his forearm to make marks as a starting point to conceive a
range of works, while Pistoletto started experimenting with screenprints on stainless steel. The
gallery developed into a workshop for the production of works that were created especially as
limited edition multiples, fashioning that combination of uniqueness and freedom that they strived to
achieve. Apart from the reproducible nature of the work, and the innovative gallery model, the most
important result was the quality of the work that emerged. This was due to the systematic,
constructive engagement among all the artists, who worked together to create a new form of art.
The works produced by Persano’s 'Edizioni Multipli' have been exhibited in various shows over the
last twenty years, including Arte Povera: Les multiples 1966-1980, Musée d’Art Moderne et d’Art
Contemporain, Nice (1996); Che fare? Arte Povera – The Historic Years, Kunstmuseum
Liechtenstein, Vaduz (2010); Light Years: Conceptual Art and the Photograph, 1964-1977, The Art
Institute of Chicago (2011).
Arte Povera and 'Multipli', Torino 1970-1975 is, however, the first show that focuses exclusively on
Persano’s gallery. Elena Re – who is concurrently working on a larger, comprehensive analysis and
exhibition of 'Multipli' – has curated a show of representative, historical works in order to shed light
on the distinctive nature and importance of 'Multipli' and its era. Alongside the multiples themselves,
the exhibition will be expanded with the display of a range of objects and documents, including
books, magazines, invitation cards, information sheets and photographs.
Sprüth Magers Berlin is concurrently presenting the solo exhibitions Radiopictures by Thomas
Scheibitz and Dailies 2008 - 2014 by Thomas Demand.
www.spruethmagers.com