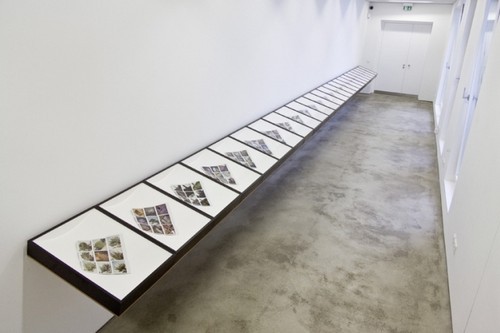 Monika Sprüth and Philomene Magers are delighted to present the first solo exhibition by French artist Cyprien Gaillard in Berlin. The exhibition comprises the 16mm film ‘Cities of Gold and Mirrors’ (2009) and the photographic works ‘Geographical Analogies’ (2006-2009) which show contemporary landscapes as complex sites of loss and potential, manifested through architecture, monuments and history.

‘Cities of Gold and Mirrors’ was filmed in the Mexican city of Cancún on the Yucatán Peninsula and consists of a sequence of five parts accompanied by a looped theme, the soundtrack of the cartoon ‘The Mysterious Cities of Gold’, a French/Japanese production popular in the 1980s. The series tells the story of Spanish conquistadors and merges South American history, archaeology and science fiction. Today, the city of Cancún, founded in 1970, offers Gaillard a landscape perpetuated by a spirit of anachronism and ruin. As hedonistic young ‘spring breakers’ return to the US with little but addled recollections, invoking a contemporary discourse of decadence and decay, so the modern hotels built of steel and glass upon the physical ruins of the mighty Mayan Empire articulate an historicized vision. Within the film's non-narrative structure, a spirit of displacement presides.

The artist’s archeological approach towards nature and architecture can be observed in his series of works ‘Geographical Analogies’. Placed in vitrines, similar to the display of archaeological artefacts, sequences of Polaroid photographs taken in various locations are juxtaposed next to each other. They draw analogies between different landscapes and their metamorphosis through architectural imposition and the shift of relevance through time between archaeological sites in Mexico or Egypt, Second World War bunkers on the Normandy coast, housing projects in the Bronx and golf courses in Scotland. Whether selected for their visual correspondences, geographical placement or political value, each photograph displays the same sense of fragility, exposing its original connotations and its transient relevance. By arranging the Polaroids side by side, Gaillard erases the hierarchy of the sites and their representational value. At the same time, the Polaroid operates as the most immediate medium of documentation: the image is developed on site and records the unique moment of perception. Over the years, the media itself will give in to time, fade and its quality as a historical witness will emerge.

Cyprien Gaillard works across a range of media, including film, video, photography, sculpture and live performance. The deconstruction of post war modernist architecture and the demise of utopian ideals on which such structures were founded have been a main concern in his latest work.